During the nineteenth century, with the advent of the industrial revolution, new machines produced high quality lace at lower cost. Previously only affordable to a privileged few, lace lavishly was used for entire garments as well as trimmings and a wide range of accessories, and was often further embellished with embroidery. In the twentieth century lace maintained its allure. Designers are drawn to the sensuality of lace, especially to notions associated with black and white lace. Lace patterns interpreted in techniques such as leather cutwork or stencil-printed fabric retain the delicacy of lace yet offer the drama of something new and unconventional. 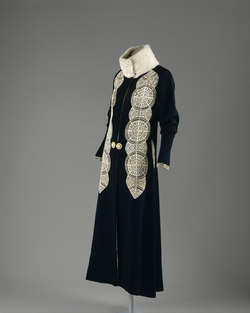 By 1910, Poiret defied the rules of fashion and suggested a new approach to couture. Drawing inspiration from the Orient he created extravagant clothes in new shapes and bold colors. This coat, on the other hand, testifies to his ability to fashion a restrained garment. The delicate white cutout leather is couched by hand onto the black coat to create an arresting graphic effect. The straight silhouette and double-button closure suggest inspiration from Chinese or Near Eastern robes, while the general look of black with white around the neckline and cuffs recalls European clerical dress.

At the helm of the House of Chanel, Lagerfeld’s strength has been his ability to expand Chanel’s design vocabulary. Here, using two distinctive elements of the house style, lace and the combination of black and white, he rejuvenates the classic Chanel suit. The placement of the lace and the way it shapes the waist brings to mind a corset, only in Lagerfeld’s provocative manner it is worn on the exterior. 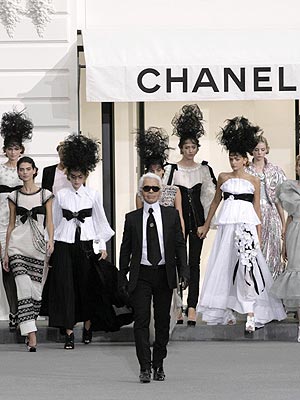 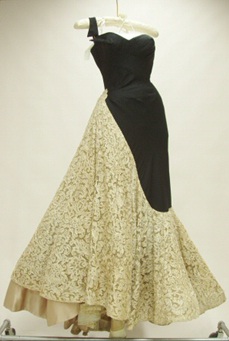 The American couturier Charles James designed a dress that embodies two archetypes of woman in one, like the Chinese symbol of yin and yang, which represent a perfect harmony created by two polar powers. The black structured bodice signifies a strong, assertive and sexy woman, while the white lacey skirt represents the soft, innocent and romantic one. 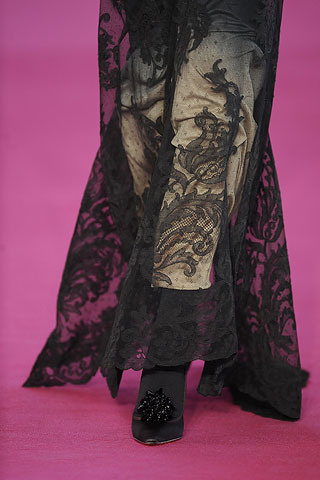 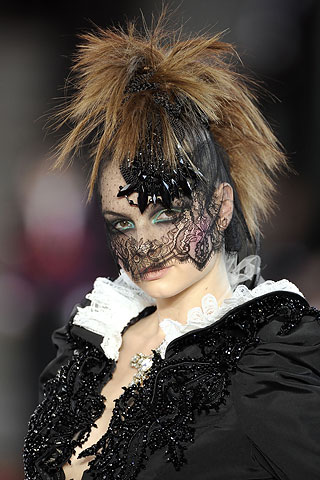 Christian Lacroix, a dedicated student of fashion and costume history, often  references several sources of inspiration, mixes them up and creates his own whimsical fantasy. Here, the white lace around the neckline and cuffs suggest seventeenth century dress. However, the long streamlined silhouette, as well as the overlay of black lace, evoke the style of the 1930s . The large stone-encrusted cross is a signature element Lacroix often uses; in this ensemble it ties all the seemingly disparate elements into one coherent look- at once ascetic and seductive.

This is the end of part II, please come back next week to read about how fashion designers interpret flowers in black and white.