Some thoughts on the McQueen exhibition and related topics

A couple of days ago I finally found the time to see the McQueen exhibition at the Met. To avoid the long lines I arrived before ten AM on a weekday, I usually try to avoid crowded places but I thought it is about time I see the exhibition that everyone in the world seems to have already seen. I guess I was not early enough as I ended up waiting thirty minutes to get into the galleries which were packed with hundreds of people. I must admit that I did not survived through the end, and not only because my baby started to scream half way through. It was just impossible to enjoy it with so many people around. I found myself chilling on the roof of the Met in no time. From what I did see it is obvious that the design of the exhibition, as always the case with the Costume Institute’s shows, was stunning. The pieces were exhibited beautifully, especially the room where hats and accessories were showcased. However, were I found the exhibition lacked was in content. Except for wall texts, which were almost impossible to read because of the waves of people coming into the galleries, there were only quotations from McQueen himself. In my opinion an exhibition that lacks to point to McQueen’s sources of inspiration, techniques and design methods misses out  on the most important thing. Yes, the garments and accessories shown are remarkable, but without some insights from the curator on individual objects it is hard to learn something new on McQueen’s work and his legacy as one of the leading designers of our time.

And on a related subject, I also went to hear Harold Koda’s conversation with McQueen’s model Aimee Mullins last Sunday. Mullins, beautiful and graceful, looked as if she stepped right out a McQueenish fairy tale. She discussed with Koda the place of unique body in the fashion world and raised the question of what is a “normal” body as perceived by fashion editors. Although I agree with her that fashion models have by no means average body, I disagree that unique types of body are becoming more acceptable by the fashion world and its image makers. In my point of view her collaboration with McQueen and other designers who created, in her own words, “interesting legs” for her benefit the designer and not the unique body. Had she not been famous and on friendly terms with most of them she would not have access to those designer’s legs. As far as I know the “ordinary” amputee, even if she or he can afford such luxury cannot go online and order Chanel legs. When McQueen used her as a runway model it served his design aesthetic and need to shock, I find it hard to believe he had the community of amputees (and its needs) on his mind. But I might be wrong. 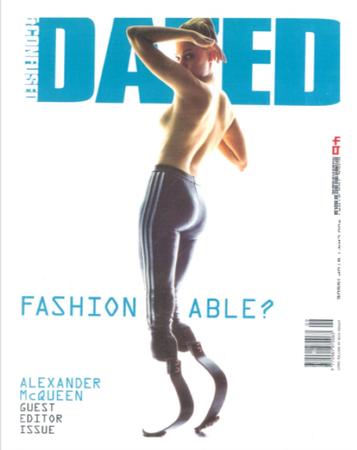 Another example of how the fashion world uses “unique” bodies, pretending to denounce its own obsession with skinny figure and lean long legs, is that of Beth Ditto on the cover of Love Magazine. “[Ditto] looks the wrong way … In a culture that debates women’s weights on a daily basis as their defining feature, well, isn’t it confounding and amazing to have an iconic figure in that culture who doesn’t have a 25-inch waist? Everything about the way that Beth looks reminds us not of her imperfections but our own … She is happy with who she is and the way she is. Don’t we all wish that we woke up in the morning and felt like that?” writes editor Katie Grand.  Yet, Emily Hill from The Guardian raises the important question whether Grand would have featured Ditto on the cover if she was fully clothed? I seriously doubt it. I recommend reading Hills review, as it perfectly captures the hypocrisy of fashion publications. 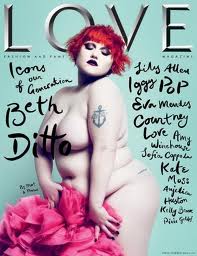 Beth Ditto on the cover of the first issue of Love Magazine, February 2009

As much as I want to believe in Mullins optimistic conclusion that unique bodies will, in the next five years, be accepted more and more as equally beautiful and legitimate, I think it will be a long while before these bodies will used by fashion designers and editors for any reason other than to shock and provoke.