Fashion & Music Symposium- The Art of Exaggeration: the Fashion & Costume of Gaby Deslys

The Art of Exaggeration: the Fashion & Costume of Gaby Deslys

In her day, music-hall performer Gaby Deslys (literally “of the Lilies”) was one of the most internationally celebrated stars of the WWI era, and one of the most fashionable. Her phenomenal success was inextricably linked to her appearance–her irresistible charm coupled with lavish and extravagant costumes kept audiences coming back for more.

Gaby came from a long tradition of daring, provocative performers. Her propensity for sumptuous ornamentation was expressed in towering headdresses, scandalously low décolletage, and exotic fabrics and silhouettes. She was as controversial as she was celebrated, but as Cecil Beaton noted: “the more luxurious and scandalous her life, the more people loved her.”[1] Men were infatuated with her and women wanted to be her.

As a performer, Gaby enjoyed financial independence that afforded her freedom and power and often put her at odds with prevailing gender standards which relegated women’s roles to wives and mothers. Unapologetically self-sufficient, her adoption of avant-garde styles, on and off the stage, exemplified her modernity. Her collaborations with leading fashion authorities, such as the couturiers Lucile and Paquin, as well as the fashion illustrators Étienne Drian and Erté, solidified her status as a fashion leader, while she herself was responsible for setting many mainstream trends.

Today, many popular musicians, such as Lady Gaga or Bjork, are synonymous with their spectacular display of clothing–their identities as performance artists inseparable from their adoption of ostentatious, eccentric styles. Going back over one hundred years, this paper provides a refreshing look at one of the early originators of the art of exaggeration, the irreplaceable Gaby Deslys. 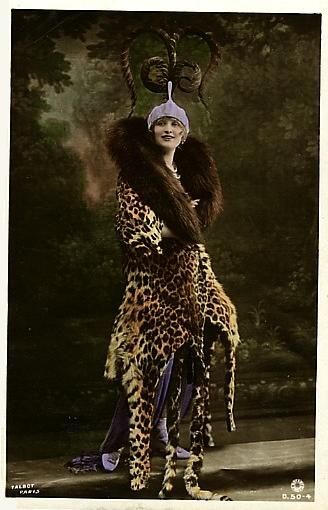 This entry was posted in Symposium and tagged Cecil Beaton, Gaby Deslys, History of Fashion. Bookmark the permalink.

4 Responses to Fashion & Music Symposium- The Art of Exaggeration: the Fashion & Costume of Gaby Deslys