A couple of months ago, I had the pleasure of visiting my friend the actress Harriet Walter who was performing at the Bard Graduate Center. She had compiled a book of amazing photographs of older women and whilst we chatted about this, we both mentioned a movie trailer we had seen for a documentary about stylish older ladies in New York.

During Harriet’s performance, I couldn’t help but notice a very dapper young man across the aisle from me, wearing the most spectacular rainbow-colored Nikes and accompanied by a remarkable-looking lady. After the show, I found myself standing next to him, looking down at Harriet’s book. Having told him how I coveted his tennis shoes, (even though I would never wear them) our conversation turned to fabulous-looking ladies but it was only once I mentioned the movie I was so keen to see that he reached into his bag and pulled out a book. It was him! Blogger Ari Seth Cohen, writer of ‘Advanced Style’ and soon to be producer-of-the-movie!

There was one more twist that evening: as I introduced Ari to Harriet and Ari showed her the cover of his book, Harriet gasped and began to laugh. It is her aunt, former model Birgit Kroencke Lee, wife of the actor Sir Christopher Lee, on the cover. 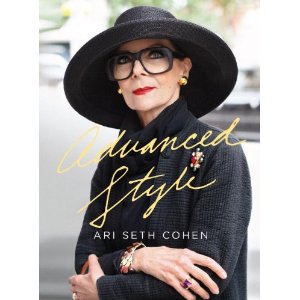 The women Ari features in his blog are stylish and dynamic. At the book launch, they all posed like professionals in some incredible outfits. Indeed, many of them are professionals, albeit retired ones. Many of them have a background in the worlds of fashion and art and all choose to live their daily lives as an expression of their personal style. The fabulous lady I met with Ari at the Bard Center that day was the artist Debra Rapoport who looked as if she and Anna Piaggi may have been best of friends.

With a book launched and a film in the works, Ari kindly made time to answer some questions:

Fiona Tedds: What was the inspiration behind starting your blog?

Ari Seth Cohen: My grandmothers were my best friends. One was very stylish and the other was very wise. I wanted to start a project that presented a positive and inspiring image of aging. Older people are made to feel invisible and I thought that it was about time to put them into the spotlight.

FT: Are there any particular fashions or styles that you find yourself attracted to?

ASC: I love extremes. For me it’s really about personal style and expression.

FT: Who were your first subjects and what was their reaction to being photographed?

ASC: It all started out with 94 year-old model and actress Mimi Weddell. She was of course used to being photographed. My process hasn’t really changed much. I approach people on the street and ask if I could take their pictures. I always start with a compliment. Most of the ladies and gentleman are very happy to be involved in my project.

FT: Have you any favorite subjects or stand-out peeps?

ASC: I have become friends with many of the ladies. The readers definitely have their favorites like 92 year old Ilona Royce Smithkin, who wears long red eyelashes made form her own hair and 100 year old, Pilates-practicing Ruth.

FT: What have you learnt from the subjects of the blog?

ASC: I have learned to live life to the fullest and embrace who I am. All the women are so active and have such great attitudes towards life. They make me want to do more and I aspire to be like them.

FT: How did you visualize the development of the blog?

ASC: I moved to New York in May of 2008 and started the blog in August. I have always had an affinity for older people and I wanted to start a project that would show that older people continue to dress up and be active and creative. The older people that I noticed on the streets of New York were not only dresses incredibly, but they had wonderful stories to share. All I knew was that I wanted to change people’s ideas about aging. I had no idea how it would be received. 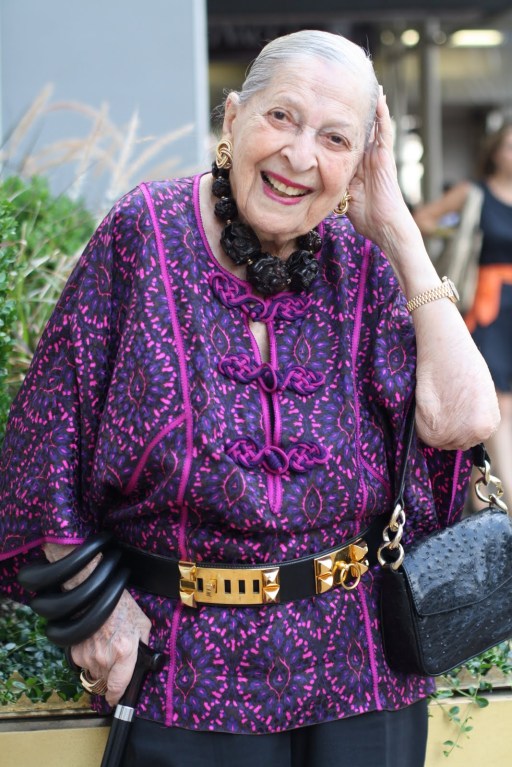 FT: Could you talk a little about being a transplant from the West Coast and your view of New York life and style?

ASC: I always wanted to live in New York. My grandma Bluma went to Columbia for grad school in Library Sciences and she always told me that it was the place to be for doing something creative. I grew up in San Diego where people dress very casually, but my grandmother and her friends were always the most elegant. I love the energy of New York. It is a great city for older people, because it forces them to be active.