L’enfant terrible of fashion, Jean-Paul Gaultier, was trained in the (not-so-terrible) “magnificent ruined city”[1] of the haute couture.  He was taught in houses that had once dictated the conventions of elegance, but that had lost their power: in 1970 he began as an assistant at Pierre Cardin, then worked briefly for Jacques Esterel, followed by two years at la grande maison Patou, before returning to Pierre Cardin in 1974. Finally, moving to the metropolis of the avant-garde, Gaultier presented his first eponymous collection in 1976.

The convergence of traditions has marked Gaultier’s career – the technique of the haute couture mixed with the style of the street, the use of cultural/historical references infused with humor – always within the framework of Parisian chic. It is no wonder that the theoretical framework of deconstruction can be applied to Gaultier’s oeuvre. Barbara Vinken describes his work as an “ongoing deconstruction of Paris fashion [as] a kind of surrealism against the grain, which consciously makes a fool of itself.”[2]

Jean-Paul Gaultier’s Fall/Winter 1993-94 collection, ‘Les Rabbins Chics,’ (figure 1) was inspired by traditional Hasidic men’s clothing. Male and female models wore Gaultier classics – black trench coats, tailored jackets and long skirts – paired with religious symbols of the Hasids, including Shtreimel (large fur hats worn on the Sabbath), Payot (side curls) and imitation Tefillin (boxes worn on the head that contain scrolls of parchment inscribed with verses from the Torah), accompanied by the woeful sounds a solo Klezmer violin.  Unsurprisingly, the show was considered fantastical by some, and an affront by others. In 1993, Rabbi Morris Shmidman discussed his community’s issues with the collection: “the whole thing is very offensive. To take men’s mode of clothing and make that into a modish thing for women is extremely inappropriate in this community.”[3] According to the Rabbi, what was improper about the collection was not the appropriation of sacred, traditional symbols, but rather the reversal of encoded gendered dress. Rabbi Shmidman’s comments touch on a key element of deconstructionist art, that it engages the viewer in active decoding of social constraints concealed behind an aesthetic form. 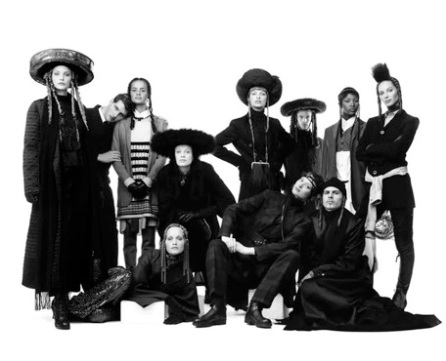 While particular garments in the show were deconstructive, the fashion show and the styling are what invite the most obvious deconstruction. The juxtaposition of visual and textual elements – in this case high fashion with religious markers – produces a critical interrogative exchange. Gautlier’s collection at once highlights and silences both elements: the fashion is masked by the blatant and shocking use of Hasidic symbols, while the delicate nature of the Hasidic objects is called into question by the fashion show context. By appropriating obvious visual markers of Hasidic men and making them convincing as fashionable clothing on women, Gaultier’s collection unsettles the idea of an essential religious symbology and pushes forward the idea of what fashion (and particularly a fashion show) can accomplish as a form of critical discourse.

Gaultier’s Fall 2006 Menswear collection channeled previous shows, most notably ‘Une garde-robe pour deux,’ presented in 1985, where models dressed in clothes designed for the opposite sex, and ‘Et Dieu créa l’homme,’ also from 1985, when Gaultier first introduced the skirt for men. While the collection fell under the “Menswear” designation, in a Gaultier fashion, the presentation included both male and female models. Figure 2 illustrates the designer’s playful attitude towards gendered dress: the female model wears a three-piece suit, while the male model wears a floor-length skirt and sports long blond hair.  The gentle subversion of gendered dressing establishes a distance from the dominant thinking about gender and clothing. The collection undermines the ‘conceptual pairs’ that have become so ingrained in the fashion system: where femininity equals one thing and masculinity another, opposite thing. We are invited to explore, play with, enjoy and rethink essentialisms. 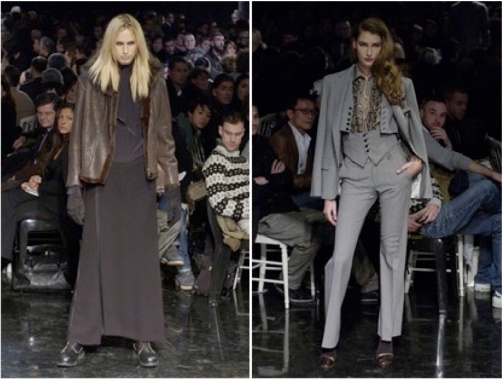 Including women in a menswear show (and vice versa) disturbs the dominance of womenswear in our current fashion system. From runway shows to magazines, designs for women are prioritized, while menswear plays a (much quieter) second fiddle. As in this collection, Gaultier has often tried to tip the scales: “Entirely in this ‘courtly’ tradition, Gaultier is one of the first to make a fashion for men which is no less striking and extravagant than women’s fashion. With his work, the nineteenth-century male renunciation has definitely come to an end. Just like women, his men wear artificial fur, lurid colors, conspicuous cuts, skintight leggings. Even the codpiece has been resurrected to display the family jewels in their old European splendor.” [4] The use of both female and male models disturbs fashion’s hierarchy, as it challenges and then reasserts the differences between men’s and women’s fashions as created, rather than inherent.

Gaultier continues to explore deconstruction in his work. His Spring 2003 Couture show was well received for its “immaculate tailoring, aching beauty and playful sense of the absurd.”[5] Several pieces in the collection were trompe l’oeil – shirts and suits appeared to float in front of the model’s body, including the passe-passe (“trick”) suit (figure 3).  This suit jacket appears to hang in suspension, as if it has been added to this runway image in post-production. The garment might float away were it not for the placement of the model’s hands on her hips, “holding” the jacket in place. Interestingly, the suit jacket, with its nipped in waist and padded hips, is almost identical in silhouette to Christian Dior’s iconic “Bar” suit.  While Dior’s suit required a myriad of underpinnings and support structures tacked to the body, Gaultier’s garment accomplishes this same shape by tacking in front of the body (a literal moving forward of the idea of the jacket). As if to underline the reference to Christian Dior, inside the jacket’s breast pocket is a sprig of lily-of-the-valley, Dior’s lucky flower. 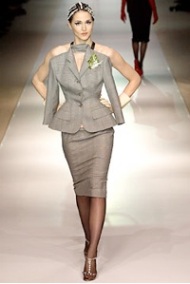 Gaultier’s suit jacket subverts the automatic link between clothing and coverage, rethinking that “conceptual pair.”[6] It is the disruption of function that is deconstructive: “In the act of displacing both norms and function the work is freed from the reduction they demand. It is no longer an exemplification.”[7] The trompe l’oeil jacket cannot be dismissed, as fashion so often is, as “just clothes” because it does not engage in its function as clothing. This refusal to function reminds that fashion is not just about clothing/cloaking the body and disallows this overused condemnation of fashion. Gaultier’s jacket expresses both the past (Dior) and the future, refusing to be relegated to its “natural place” in both fashion discourse and fashion practice.

Gaultier has often been referred to as a postmodern designer, and certainly his penchant for mixing genres, styles, and epochs – sometimes without any apparent goal – betrays him as such. Chenoune likens Gaultier’s postmodern design to “some surrealist editor, [he] would cut and paste, matching up precisely those things that did not match… Eclectic mixes of this sort were to become his trademark.”[8] Insofar as deconstructive ideas involve change and are futural, uncertainty and even alienation often accompanies them. Gaultier’s work has often offended and elicited negative reactions. Vinken proclaims “according to the criteria of the taste that has been lovingly cultivated over centuries, [Gaultier’s] fashion is completely tasteless,”[9] while Chenoune points out that “Gaultier’s age finds him…disturbing.”[10] Perhaps this is the kind of outrage and confusion that accompanies the unveiling of a truly new, deconstructed form.

This essay was originally published in the Spring 2012 issue of Vitrine: A Printed Museum.