Yes, this is Ginette Spanier. She was the directrice of the House of Balmain from 1947 to 1976. 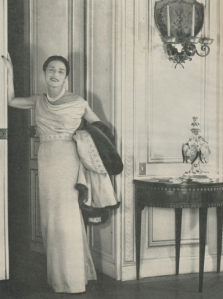 From It Isn’t All Mink.

In her autobiography, It Isn’t All Mink, Spanier describes her job and its various trials:

“…If a seam is not quite right, that is a matter of life and death. If a mannequin falls in love and thinks of getting married, and her work reflects her absence of mind, other mannequins behave as if she had committed murder. If a woman is not soignée enough (that abused word means “well-groomed,” but mere “well-groomed” falls far short of the standards of the couture, let me tell you) it is a tragedy of melodramatic intensity. I remember appearing once with Pierre Balmain when I thought I really looked marvelous. Hair, shoes, dress, all were perfection. Pierre Balmain screamed. ‘Ah-h-h,’ he screeched, ‘your bag. It’s terrible.’ So, what disaster for me if I failed in this respect. I was very far for soignée when I met Pierre Balmain. 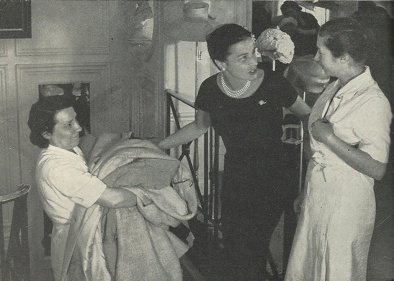 Renée and Edith, deux habilleuses. From It Isn’t All Mink.

“Basically I would say the directrice is responsible for every human problem throughout the part of the firm which the public can see. The workrooms are not her business. But it does become her business if a certain dress does not fit, so she had to co-operate with the fitters responsible for their workrooms. If the terrible shrieking of two mannequins coming to blows over who shall show what dress should penetrate to the ears of, say, the Begum Aga Khan, then that also is the fault of the directrice. If the tearing and snarling sounds made by two vendeuses quarreling over a customer should reach the customer, that is the directrice’s fault too. If a customer does not pay her bill, that somehow is also the directrice’s fault. And so on, and so forth, right round the clock” (185 – 186). 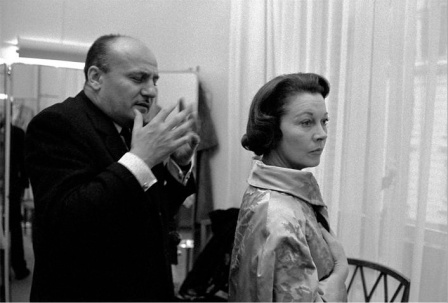 The creation of each season’s collection was always dramatic:

“As the collection is being made there is poetry in the air. I have sometimes, in the early days, stood on the pavement after dark and stared up at the House of Balmain, seeing every floor blazing with light and the dark shadows of busy women passing and repassing across the unshaded glass. And I have been there the next morning at 5 A.M. to see them still at it. Tired little girls from workrooms with arms full of half-finished gowns. Model girls, eyes made up like ballerinas, weeping from exhaustion, surviving on bottles and bottles of champagne. I love the wildness in the air, the elation and the perennial feeling of the dress rehearsal that means, ‘We open tomorrow.’ It is as though the pavements of the rue François Premier were in some way electrified” (171).

In 1954, Life magazine printed as series of photos of the beautiful confusion found backstage during a Balmain couture show. To view the photos, including some images of Ginette Spanier, please visit sighsandwhispers.com. 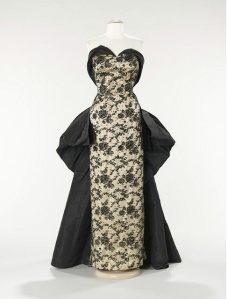 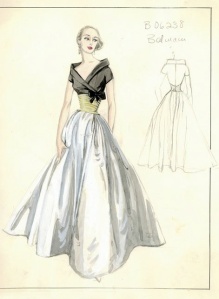 Before founding his own house in 1945, Pierre Balmain worked under Edward Molyneux and at Lucien Lelong alongside Christian Dior.

“Pierre Balmain was amused by my enthusiasm, my enjoyment of organization, my love of selling. We talked together. He was broad and strong and in his thirties. He had been studying to be an architect before he became fascinated by women’s clothes. I am sure it is the way that clothes are made and built that inspires him. He is an extraordinary personality. Bouncy as  a countryman, he is the exact opposite o the conventional idea of a couturier…. He has a wonderful memory. He remembers every dress he has ever made, with its name and number, and the customer to whom it has been sold. His whole existence is the couture…. He loves long evening dresses and little woolen numbers, high at the neck. He loves dancing. He loves Italy. He loves publicity. He loves very luxurious clothes with embroidery all over them; he loves furs, he loves impossible combinations of material…lynx fur squirting out of tulle. Once he made an ermine blouse. He loves navy and black, brown and black. He won’t have an even number of anything, particularly buttons. It is a terrible crime to consider four buttons instead of three. He likes narrow feet, pointed shoes, tall girls, rich women…. He loves wild projects that will take him to the end of the world” (176 – 177).

The Seidmanns, Ginette and her husband, Paul-Emile. From It Isn’t All Mink.

It Isn’t All Mink begins with a series of stories about Ginette Spanier’s happy childhood, when she longed to be English while living in the French countryside. At the start of World War I, she moved to England, were she stayed, learning, living, and working until her marriage to Paul-Emile Seidmann brought her back to her native France.

The majority of the book describes the next six years, from 1939 – 1945. The Jewish couple spent most of the war hiding from the Nazis in occupied France. At the beginning of the war, they faced discrimination, and later found it necessary to change their surname and move frequently to avoid persecution and death in a concentration camp.  These years spent in fear of capture – without money or enough food – provide a great contrast to Spanier’s life after World War II, full of fashion and frivolity, but it is these chapters that best display her intelligence, courage, and perseverance. And while the focus of the book shifts to providing an understanding of haute couture, Spanier’s voice remains strong, and her diligence and intelligence find a new medium – as the directrice of a fashion house.