Jones (1809 – 1874) was an architect, a designer, and the author of  The Grammar of Ornament. Published in 1856, The Grammar of Ornament contains a series of chromolithographs tracing the development of patterns through time and different cultures. In addition to the illustrations, the publication features a list of 37 design propositions including the following:

1. The Decorative Arts arise from, and should properly be attendant upon, Architecture.
3. As Architecture, so all works of the Decorative Arts, should possess fitness, proportion, harmony, the result of all which is repose.
4. True beauty results from that repose which the mind feels when the eye, the intellect, and the affections are satisfied from the absence of any want.
23. No composition can ever be perfect in which any one of the three primary colours is wanting, either in its natural state or in combination.
37. No improvement can take place in the Art of the present generation until all classes, Artists, Manufacturers, and the Public, are better educated in Art, and the existence of general principles is more fully recognized.

A detail from The Grammar of Ornament. The complete publication is available online as part of the University of Wisconsin’s Digital Library for the Decorative Arts and Material Culture.

Jones was fascinated by the designs and patterns of ancient civilizations. His highly influential chromolithographs were the result of careful study of the architecture and design elements found in famous archeological sites and historically important buildings in Europe, the Middle East, Africa and Asia. Of the many design styles he recorded, Jones was most captivated by the geometric Islamic and Indian architectural details he discovered through travel and while viewing European exhibitions. According to the Victoria and Albert Museum, “the section devoted to ‘Indian Ornament’  [in The Grammar of Ornament] took its examples from objects shown in 1851 and at the 1855 Paris Exhibition. In comparison to the ‘fruitless struggle after novelty, irrespective of fitness’ that he found in European manufactures, Jones found in the Indian work, ‘all the principles, all the unity, all the truth, for which we had looked elsewhere in vain.'”

Not surprisingly, Jones’s illustrations were widely copied by other designers who found inspiration in the pages of colorful geometric designs. This was not the first time his illustrations had inspired others; in March 1936, before publishing The Grammar of Ornament, Jones published a series of color plates on the designs and decoration of the Alhambra Palace in Spain. The chromolithographs were published in two volumes in 1842 and 1845 called Plans, Elevations, Sections and Details of the Alhambra, and were very likely the inspiration of this textile design:

Another manufacturer, Warner, Sillett and Ramm, began producing textiles with the designs of Owen Jones in the 1870s. As the Spitalfield’s firm evolved from Warner, Sillett and Ramm into Warner and Sons, the successful collaboration between Jones and Benjamin Warner continued. Together they produced a series of textiles with designs evoking the Renaissance as well as the more stylized patterns to which Jones was so partial.  While continuing to find inspiration in Islamic design motifs, Owen Jones also created motifs using the colors and patterns popular in sixteenth- and seventeenth-century Florence; examples of these textiles include our mystery textile and the textiles found below:

This textile features acanthus leaves, a common design element in ancient Egyptian and Greek art and architecture. This motif continued to be popular during the Renaissance and in later centuries as it remained a potent symbol of royalty and tradition. 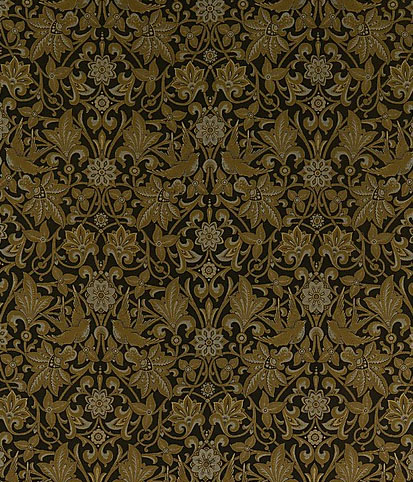 While Chandos was produced in 1873, Warner purchased the design from Jones around 1868, two years before his Spitalfield’s firm began operations.

In summation of Owen Jones’s appreciation for historic design, here is Proposition 36: “The principles discoverable in the works of the past belong to us; not so the results. It is taking the ends for the means.”

For more information on the life of Owen Jones, please see this article.