Yes, this lithograph is by Mela Koehler (1865 – 1960), a close collaborator with the Wiener Werkstätte.

Founded in 1903 by Josef Hoffmann and Koloman Moser, the Wiener Werkstätte, or Vienna Workshop, remained active for only 29 years, but its influence perseveres. At its conception and long past its dissolution, the Wiener Werkstätte serves as an unforgettable reminder that progress cannot always be measured in the charts and figures so often employed by proponents of mass production.

Members of the Wiener Werkstätte included artists and architects interested in elevating the ordinary and mundane, who believed strongly in the ability to improve the most utilitarian objects and the most menial tasks with thoughtful design. The movement was both socially and aesthetically progressive, embracing new fashions as part of a Gesamtkunstwerk, a unified work of art that addresses all facets of design, including the architecture and interiors of the home and workplace. Of course, the Workshop owed much to William Morris and the Arts and Crafts movement.

So, what was Mela Koehler’s role? Born in Vienna, she studied at the School of Applied Arts with Koloman Moser. She was a member of the Österreichischer Werkbund, an organization that held similar values to the Wiener Werkstätte. Koehler was also a member of the Vereinigung bildender Künstlerinnnen und Kunsthandwerkerinnen Wiener Frauenkunst, or Association of Female Artists and Craftswomen, which was commonly abbreviated to Wiener Frauenkunst. She was a supporter of women’s rights and women’s suffrage, so it is fitting that her clever fashion illustrations for the Wiener Werkstätte often feature women who are direct and confident.

Koehler worked closely with members of the Wiener Werkstätte from the late 1900s to its closure. As an illustrator, she participated in the design of more than 900 postcards featuring whimsical holiday themes and fashion illustrations. 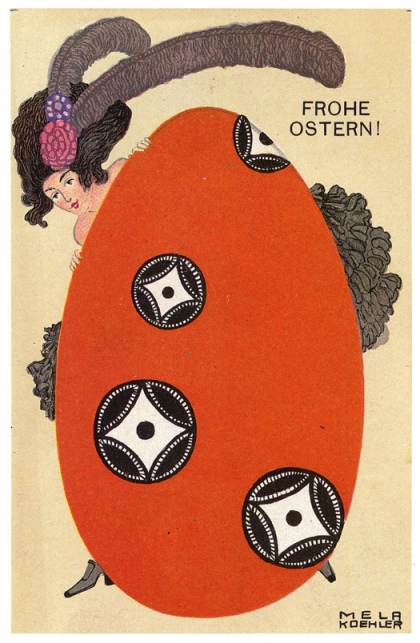 Like other products of the Workshop, these postcards carried a strong message: that great design can impact and improve every part of life. The Workshop created these postcards during a period when mail delivery occurred multiple times a day, and these holiday cards amused recipients while the fashion illustrations informed women on the popular patterns and styles of reform dress.

Though the holiday postcards often featured period dress, the aesthetic of the Wiener Werkstätte is visible in Koehler’s fashion illustrations, which shared the exaggerated drama of the frenetic, abstract patterns of the fashion fabrics designed by Josef Hoffmann. For example, here is a dress the recipient of Monday’s mystery postcard may have worn:

Of course, the modern Austrian woman of the 1910s would have paired this dress with the perfect accessories. Perhaps she would have worn shoes with a similar pattern, or an equally colorful and modern purse. And can you imagine? Only several years later, in 1918, an Austrian woman could have worn this ensemble to the polls! Progress, indeed.

Interested in learning more about Mela Koehler or the Wiener Werkstätte? Visit next week for a post about textile design with additional illustrations and images.