Founded by Roger Fry, Duncan Grant and Vanessa Bell in 1913, the Omega Workshops became the first English organization to fully embrace Post-Impressionism. Though short-lived, the Omega Workshops were the English answer to Paul Poiret’s École Martine and the artistic complement to the well-known literary group in Bloomsbury. This group of artists grew to include Frederick Etchells, Wyndham Lewis, Paul Nash, David Bomberg, William Roberts, Mark Gertler, and others, all of whom found inspiration in the works of Cézanne, Picasso, and Braque.

Roger Fry did not care for Art Nouveau; he did not care for William Morris and his tenets, and he did not care for what he classified as “Northern Art”, or art that is easily confined within the perimeters of a canvas or a page of book. In creating the Omega Workshops, Fry’s goal was to establish an organization that provided an income and an outlet for English artists who ascribed to the Post-Impressionist aesthetic but not to socialistic ideals. If Impressionists merely explained the world, Post-Impressionists sought to change it, and Fry hoped that the Omega Workshops would support innovative English artists who, like him, found inspiration in the structure of primitive art and the urgency of brash colors. Under Fry’s direction, the products of the Omega would emphasize “the use of bold and brutal colour, the acceptance of pictorial conversations continued from the canvas around the room” (1). Around the room, on screens and table and chairs, and printed on brightly colored textiles – the canvas was the room, the home, and the hostess. The Omega Workshops would create four-dimensional works of art.

On May 14, 1913, the Omega Workshops were officially established at 33 Fitzroy Square in London near Tottenham Court Road. Over the next two months, the artists work tirelessly to create screens, rugs, ceramics, furniture, and textiles in time for the Omega’s opening on July 8.

In April 1913, Fry, Bell and Grant successfully finalized initial designs for Omega printed linens. Like those of École Martine, the textiles of the Omega Workshops possessed a simplicity and an authenticity. They were immediate and uninhibited, a purified expression of emotion composed of formal repetition and dramatic color choices. According to the Victoria and Albert Museum, “Fry believed that designs should not be too mechanical and should show evidence of the artist’s hand. The workshops produced six printed linens which were used by the most daring clients as dress fabrics.” As a fashionable woman and an artist, it was Bell who first saw the opportunity to use Omega linens as both interior and fashion fabrics. 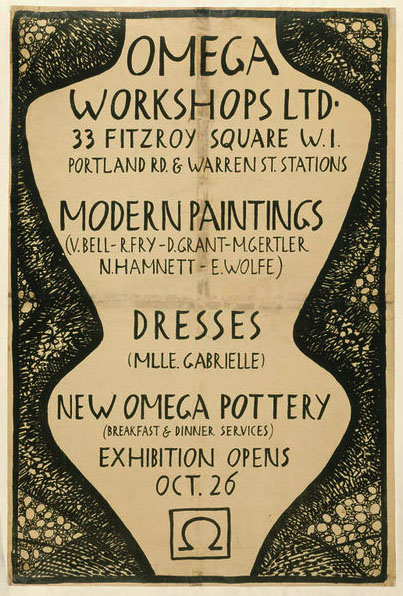 In May 1915, mere days after the creation of the Omega, Vanessa Bell expressed interest in establishing a dressmaking initiative. Inspired by her recent trips to Paris and Turkey, Bell designed a series of hobble skirts, tunics, and robes in brightly colored fabrics that matched the colors Bell used frequently on her canvases. Though her designs were similar to Poiret’s popular and dramatic creations, her efforts received mixed reviews. One critic, Bell’s sister Virgina Woolf, wrote of a particular outfit: “What colours you are responsible for! Karin [Stephens]’s clothes almost wrenched my eyes from the sockets – a skirt barred with reds and yellow of the vilest kind, an a pea green blouse on top, with a gaudy handkerchief on her head, supposed to be the very boldest taste” (2). Despite her strong reaction to one of her sister’s designs, Woolf remained a patron of the Omega and the unique clothing that Bell so passionately produced.

Until 1917, Vanessa Bell managed all dressmaking and fashion accessories activities, and some cite the moderate success of the Omega to Bell’s clever and enthusiastic marketing. By 1916, select patrons had repeatedly returned to purchase the Omega’s imaginative hats and clothing, but the Workshops’ dramatic designs and prints had continually failed to resonate with a wider audience. Despite Bell’s efforts, she could not establish a strong public demand for the Omega’s fashions, through they remained a staple of those familiar with the Bloomsbury group. After a period of decline, the Omega workshops closed by summer 1919.

Like all of the Omega’s designs, this tunic designed by Winifred Gill is both functional and expressive, a fusion of art and fashion. Other designs commissioned by friends of the Omega include kimono-style cloaks, colorful silk stoles, waistcoats, and color-blocked swim suits.

In this press photograph, “Hamnett wears a cloak, which combines the fashionable shape of the kimono with a bold hand-painted design of abstracted sunflowers. Gill wears a waistcoat, also with sunflowers, over a printed blouse and a striped skirt” (3). 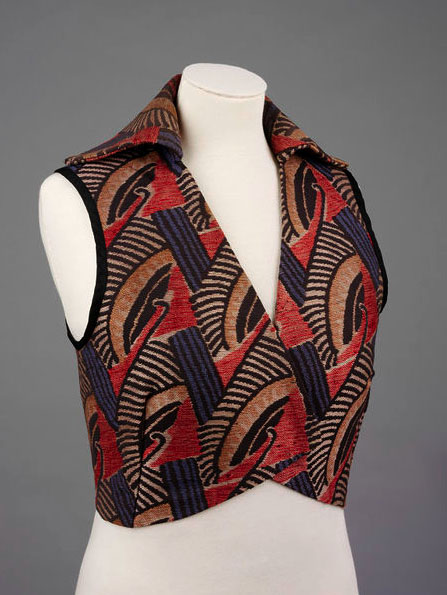 This waistcoat, possibly designed by Joy Brown out of “Cracow” furnishing fabric, is a rare extant example of the clothing designed by the Omega Workshops.

After the Omega’s closure, Roger Fry and other Omega artists continued their creative pursuits. In some artworks produced after 1919, like Fry’s Still Life with a T’ang Horse, elements of supposed nostalgia appear within the paint strokes. According to the Tate, the black vase, the paper flower, and the panel of handpainted paper were all made at the Omega Workshops.