Downtown, Uptown: From the Dry Goods Store to the Palace of Consumption- Part I

This is a two parts post,  presented first in May 2013 at the our annual symposium.

In 1835, the wealthy merchant Seabury Tredwell bought the house on 29 East Fourth Street in New York City. “The elegance and beauty of this section cannot be surpassed in the country,” said the Morning Herald of the neighborhood. Indeed, the wealthiest and most fashionable families in the city chose the Bond Street area as their place of residence, away from Lower Manhattan’s congested streets.

However, in just a few years, Tredwell’s once fashionable residential address found itself in the heart of another commercial center, with hotels, theaters, stores and restaurants surrounding it on all sides. New York City’s former mayor, Philip Hone, lived not far from the Tredwells. In 1850 he noted in his dairy that “The mania for converting Broadway into a street of shops is greater than ever.”

Between the 1850s and the turn of the century, the industrialization of America made many Americans money more quickly than they could spend it.  In New York, the architects McKim, Meade and White erected magnificent palaces along Fifth Avenue for those who wished to display this wealth. Commerce chased wealth and fashionable residential neighborhoods kept one step ahead of commercial centers in a steady northern migration up the island of Manhattan.

Beginning near Bond Street, commercial palaces were built to replace the residential ones. Eventually, the northern march of commerce reached Union Square. One of the stores to follow this path was Lord and Taylor.  On Monday, November 28th, 1870 the new Lord & Taylor department store at 901 Broadway, opened its doors. 10,000 costumers were said to use its elevator in the first three days of operation. The steam elevator, still a novelty in New York City at this time, enabled shoppers to arrive at ease on higher floors, where thanks to the advent of industrialization, more and more merchandise waited for their heart’s content.

This highly ornate cast-iron, five-story palace, joined other downtown businesses that sought to establish themselves among the smart set, like Tiffany and Company and the downtown dry goods store Arnold Constable. The  New York Times described the building as honest, “proclaiming itself to be iron at first glance. Its wealth of filigree acknowledges with all honesty what it is made of and could not have been in stone for millions. The decoration is sparse, though airy and graceful, and merits more than anything else the appellation of iron lace-work.” By not attempting to imitate the appearance of stone, like some other stores, Lord & Taylor’s new cast-iron façade communicated both innovation and modernization. 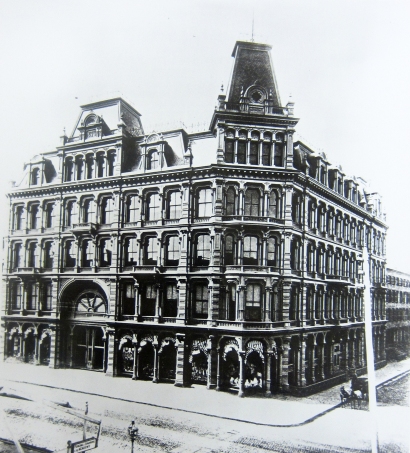 Lord and Taylor at Broadway and Twentieth Street, 1870-1904. Special Collections and FIT Archives

Lord & Taylor’s history begins in the early decades of the Nineteenth Century. In 1826, with a $1,000 loan from his wife’s uncle, the English immigrant, Samuel Lord opened a dry goods store at 47 Catherine Street. In those days, Lower Manhattan was the center of New York City, and Catherine Street its hub for shopping and socializing. Just a few years earlier, across the street on the corner of Cherry, Henry Sands Brooks opened his men’s clothing store, named at first H. & D.H. Brooks & Co., and later simply Brooks Brothers. Not far from there, on Chambers Street, the twenty two years old Alexander T. Stewart opened his dry goods store in 1823. It would later become one of the most successful department stores in New York.

To distance themselves from the market mentality of the street, Lord  &Taylor had a strict no “pullers in” policy. In addition, prices were not negotiable. In two decades this practice would become a standard for department stores around the world, but in the 1820s and 30s it was quite an innovation.

Lord & Taylor was almost an instant success. In the next few years it grew rapidly, first expanding to the adjoining building on 49 Catherine Street, and later moving into a four story building down the street, where shelves were full to capacity with bolts of English fabrics for women’s dresses, and with blankets and linens.

The fast growing population forced the city residential areas to expand north,  a trend that must have been felt by Samuel Lord, who, while still on Catherine Street, purchased a coal yard at the corner of Grand and Chrystie Streets. In 1853 he opened the new Lord & Taylor on that site. The building featured the first large glass-domed central rotunda in the city, an innovation that flooded the shopping floor with natural light. Lord & Taylor were among the first dry goods stores to sense not only that the fashionable crowd had started moving uptown, but also that it was looking for a new kind of shopping experience.

The great world fairs, such as London’s Great Exhibition at the Crystal Palace in 1851, and the New York Crystal Palace in 1853,  were the stimulus, if not the inspiration, for the growth of dry goods stores into department stores. The display of quantities of goods in a large well- lighted space, in addition to the high ceilings and architecture of iron and glass, simulated the experience of the world fairs, with the advantage of being able to actually purchase the goods.

In addition, urbanization, mass transportation, and mass production were key factors to the development of department stores. The Industrial Revolution enabled all of these factors to exist at the same time, reaching a new peak in the mid-nineteenth century.  In New York, A.T. Stewart was the most innovative of the bunch, erecting in 1846 a six story marble building on Broadway at the north side of City Hall Park. The “Marble Palace,” as it was called by New Yorkers, featured plated- glass windows along its façade and was hailed by the Tribune as “a real sensation.” Carriages, transporting costumers to and from the store, lined the street, most likely contributing to the already chaotic traffic on Broadway. 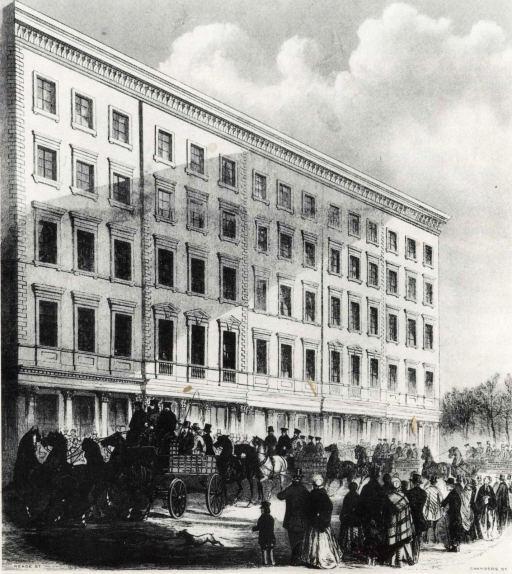 Further uptown, at Grand Street, Lord & Taylor also enjoyed the “carriage trade,” as evident from the following advertisement, from August 2, 1854:

SPECIAL NOTICE TO THE LADIES- The paving of Grand Street with Belgian pavement is now completed from Broadway as far as the store of the undersigned, and Ladies who have been prevented during the last three months from reaching our store in carriages, are informed that the interruption is now removed. 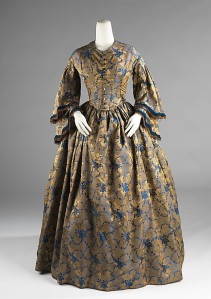 How hard it must have been to board and descend these carriages in the fashions of the 1850s,  when several layers of stiff petticoats and a horsehair crinoline were necessary to achieve the fashionable full skirts, reaching sometimes seven yards in circumference.

The Lord & Taylor advertisement shows us not only that Grand Street has become an important commercial area but also that retailers were targeting women shoppers in particular. A.T. Stewart, for example, employed handsome young clerks to “please the ladies.” Spaces like the “Ladies’ Parlor” on  the second floor where shoppers could study their appearance in full-length mirrors, offered  ideal environment for women to leisurely shop and socialize. 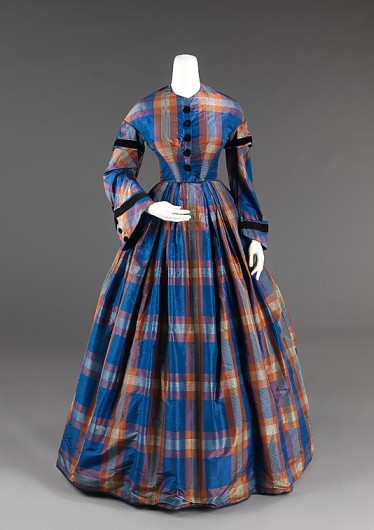 That shopping became an important social status is evident from a poem written in 1857, titled “Nothing to Wear”:

Nothing to wear! Now as this is a true ditty,

I do not assert- this, you know, is between us-

That she’s in a state of absolute nudity

But I do mean to say I’ve heard her declare,

When at the same moment, she had on a dress

Which cost five hundred dollars and not a cent less,

And jewelry worth ten times more I should guess,

That she had not a thing in the wide world to wear!

Referring to a young lady of Madison Square, this poem illustrates that wealthy New Yorkers had become obsessed with shopping for luxury goods. One’s clothing, house, furniture and leisure activities determined her social standing. In addition, promenading had also become a symbol of wealth and status. As James Fenimore Cooper noted in a letter to his wife in 1850, New York City is “a great arena for women to show off their fine fathers in.“ The industrial revolution provided not only more wealth to more families, but also cheap immigrant labor, which in turn freed mother and daughters to spend more time outside the home in leisure activities. 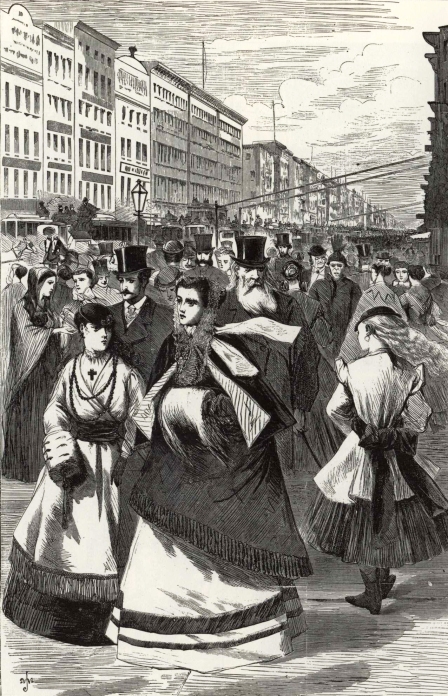 Please come back next week for part two of this post in which I will continue to explore how department stores in New York evolved during the Nineteenth Century to the fashion emporiums they are today.

3 Responses to Downtown, Uptown: From the Dry Goods Store to the Palace of Consumption- Part I