Last week I tried to show that although it is easy to see the direct influence of military on 1940s fashion, uniform-inspired fashion was not necessarily carried into the 1980s simply as part of a 1940s retro. While designers of the 1980s adopted the broad shouldered silhouette of the 1940s, they also poured into the mix ethnic elements that were influenced by current events, as well as military iconography that originated from the youth movement of the 1960s. It is interesting that during this decade, and especially in the earlier years, many editorials and ads in fashion magazines used imagery that evokes World War II to promote fashionable product.

My research focused on Vogue Italia because brands such as Armani and Versace were extremely successful and directed the look of the decade internationally. In September of 1982 the magazine published a black and white editorial titled “Un’altra Moda Militare”(Another Military Fashion). This thirteen pages-long editorial shows that romanticizing the 1940s war years, as Yves Saint Laurent did a decade earlier, was quite common in fashion magazines of the period. 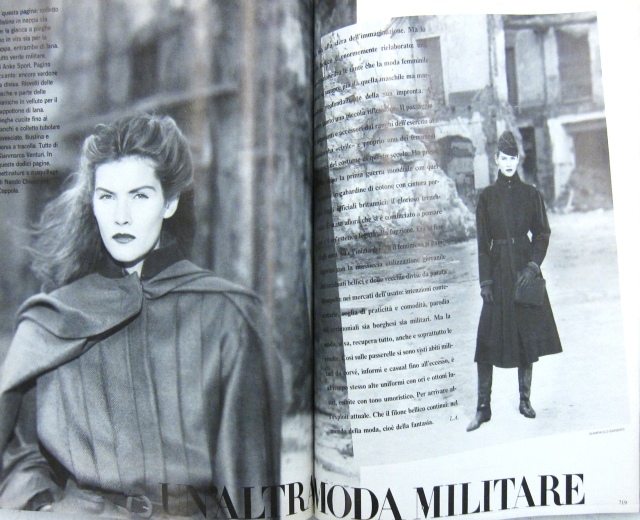 The models, in glamorous 1940s Hollywood-style hair and makeup, are photographed against a backdrop of bombed buildings and deserted streets. Each is wearing at least one military-style element, such as the trench coat, aviator cap or sunglasses, leather boots, and even a medal decorated beret. The looks and poses are meticulously stylized; one would not mistake these for real pictures of World War II. There is a stark contrast between the subject of the pictures and the way in which it is represented. The clothes of heavy woolen fabrics and leather, and the background which is set to look like a destroyed city, contrast with the romanticized hair and make up styling and the soft camera lens.  Clearly, this is not an attempt to face war memories of Fascist Italy’s collaboration with the Nazis, or an attempt to recreate a true image of women in war time. But rather, the background is there only to make the image more authentic so the clothes will appear more desirable, and therefore become more saleable. 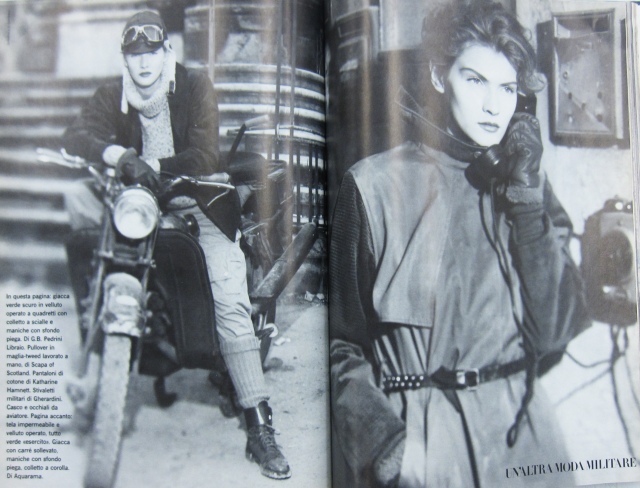 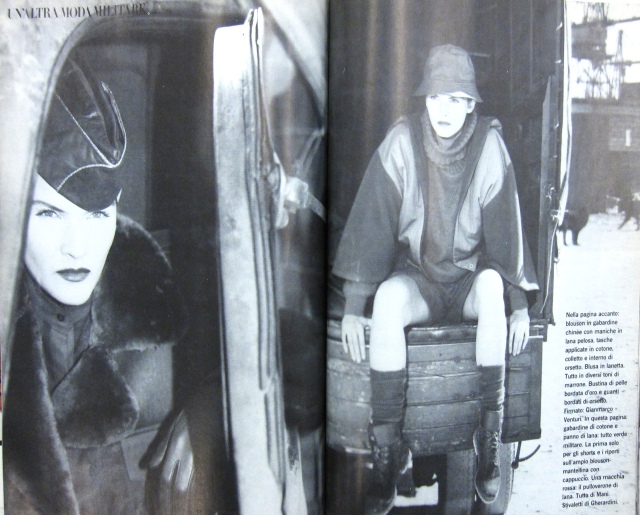 It is, of course, interesting to compare how fashion magazines in war time confronted the problem of reporting on current events, yet continuing to promote fashion. The photographer Lee Miller, American Vogue‘s war correspondent, who accompanied the Allied Forces was one of the firsts to send out pictures of the concentration camps Buchenwald and Dachau, as well as pictures from occupied Germany. One of the most famous pictures of that period was of her in Hitler’s bathtub in his Munich residence, taken by Life Magazine photographer David E. Scherman. 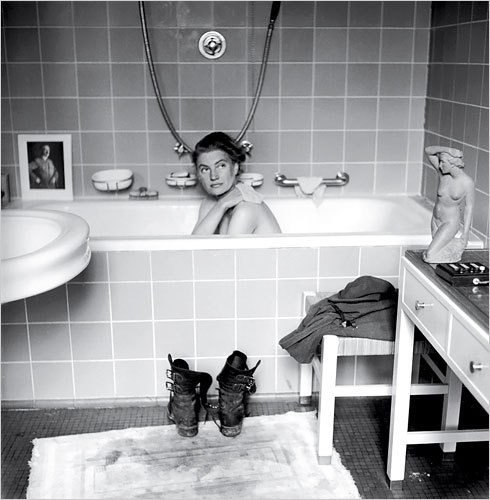 Miller’s report, accompanied by explicit pictures of starved bodies, injured soldiers, and beaten prison guards, was published by American Vogue, June 1945, in an article titled “Germany… out of the German Prison.” It is a stark contrast to the 1980s editorial in Vogue Italia. But, more interestingly it is also quite different from the Paris fashion report that was published in the following page, spanning five more pages and including illustrations. Although Vogue‘s report is brave and serious, it reveals the split-personality of women’s fashion magazines at that time. On the one hand reality cannot be ignored, on the other women were still expected to care about fashion and to consume it. 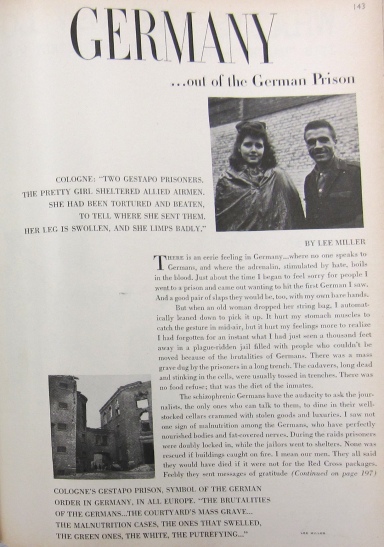 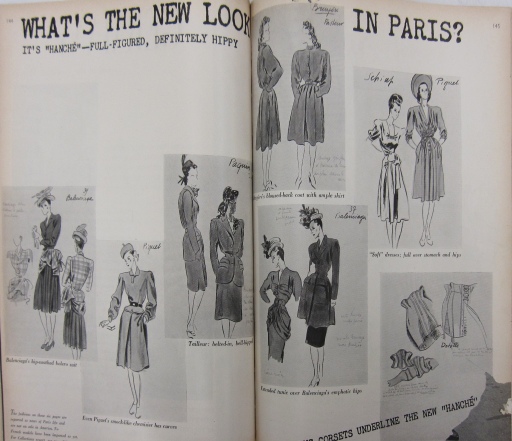 As the editorial in Vogue Italia  suggests. the 1980s version of war or military iconography was watered-down, fashion designers of the 1980s often stripped these elements of their original context. By doing so they stripped them of their political and ideological meaning and turned them to mere decorative elements. Fashion editor Stefano Tonchi notes that:

…shiny black leather boots, riding pants, jackets with hussar braiding, coats with epaulettes decorated with gilded fringe, capes and mentals, coats of arms, decorations, metal eagles and gold buttons are all decisive elements. Freed of their practical function- the epaulette, for example, was created as protection against blows of the sword- these elements have assumed a symbolic and at time ideological value, but to an increasing extent they are merely decorative, to the point of becoming simply the surface on which to place a logo or a set of initials: the Armani eagle, the crossed C’s of Chanel, or the Versace’s medusa

But while the specific function of these military design elements may no longer be necessary, their stylistic language serves the clothes, or the way they appear at least. Last week I showed an image from Elle magazine, where this point is made clear. The model, leaning on a black stretch limo, is wearing a satin trench coat and black aviator sunglasses. Her head is covered by a tight stretch hood and her bare legs are exposed- one of them on top of a black suitcase from which the Soviet Union’s flag is hanging. It is suggested to the viewer that under the coat the model is wearing only a short bodysuit- the trench coat therefore no longer serve its intended function, that of providing warmth and protection. 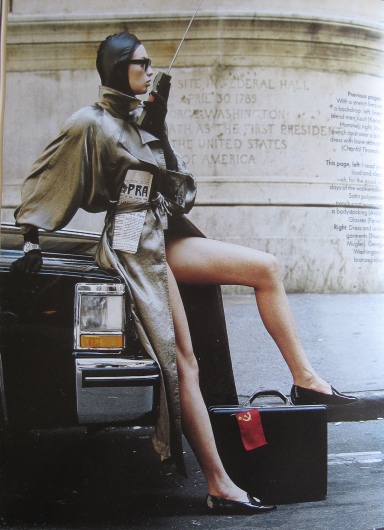 While the adoption of military-like fashion in the 1940s was in great part due to necessity, and therefore served a purpose and function- newly added pockets, pants instead of dresses- fashion designers of the 1980s used uniforms, or excerpts of it, only to convey an idea and a desirable image.

This photograph uses the eroticism associated with uniform, especially when worn by a woman. The model’s posture displays a provocative, unashamed sexuality, and although the setting evokes spy movies, clearly she is not attempting to blend in. This brings to mind role playing and cross dressing. In the essay “Eros and Uniform,” author Richard Buckley proposes that by “Idealizing the masculine form, uniform represent power, simultaneously inspiring emotions of security, awe, fear, repulsion and desire…because of their association with a sense of authority and force- soldiers, policemen and prison guards- uniforms are related to sexual potency, Affording the wearer a sense of anonymity, they can intensify or subvert conventional gender role playing.”

This model is at the same time anonymous (sunglasses, head cover, gloves) and exposed (bare legs, chest thrust forward), she is both masculine and feminine. In many ways this photograph is 1980s quintessential, not only for the overt sexuality, but also for diffusing seemingly foreign concepts in a way that no longer relates to just one or the other. The juxtaposition of opposites is characteristic to postmodernism, and what makes the fashion of the 1980s, and its relating imagery, unique.

Next week’s post in the series Uniformed Individuality, will focus on men’s fashion of the 1980s. I will try to trace the uniform, military and 1940s influences in the men’s department as well.