This is the last and final part of the special four-parts post Fashion in Black & White. In the past three weeks, I have attempted to show that the combination of black and white is a theme most, if not all, major designers have explored. Through the themes Structure, Lace and Flowers, I tried to illustrate that black and white dominant fashionable appearance for over a hundred years. This week I’d like to show examples in which designers use the graphic nature of these two colors.

Every design starts with a line, whether on paper, on a dress form, or a human body. Although the many meanings attached to black and white appeal to fashion designers, it is first and foremost the visual effect that inspires them. The graphic nature of black against white manipulates the eye, drawing its attention to where the designer wants it to look. The lines and planes of black and white are for many designers the basis for innovative and modern design.

Fashion often takes inspiration from ideas previously explored in painting and graphic art. The impasto brushstrokes of Impressionism, the linear symmetry of Art Deco, the optical illusions of Op Art are all part of a graphic vocabulary that constantly reenters fashion. Since fashion designers create in a three dimensional medium, they can further experiment with these visual means. In fashion, the body rather than the fabric is the surface, the canvas for a creation. The dimensionality of the body is used by fashion designers to emphasize the graphic intensity of black and white.

One of my favorite designers is Dries van Noten. He is of course known for his use of bold, colorful prints, but in 2009 he created a group of beautiful designs in black and white with only subtle hints of yellow and gold in some of the garments. 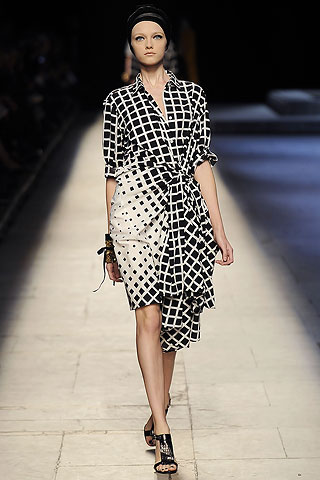 A simple shirtdress is the starting point of this dress, yet the body underneath appears to alter its appearance, shaping the print and dictating the flow of lines as it moves. It is an example of van Noten’s notable, apparently effortless chic. In fact it is carefully crafted; the print is placed so that the diminishing density of black versus white draws the eye to a point, a technique borrowed from Op Art. The effect is furthered by the twist of fabric, beautifully draped from the waistline, where all the lines of the print appear to coincidentally meet.

Another design that was influenced by an art movement is seen below, and was made by designer Jeanne Lanvin. 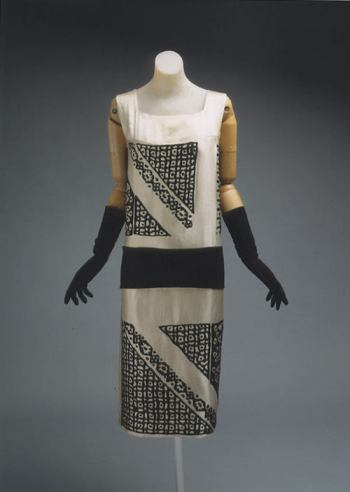 This striking dress demonstrates Lanvin’s ability to bring together decorative and modern motifs with exquisite technique. The graphic Art Deco pattern is created by applying cut black fabric with hidden hand-stitching .The black waistband emphasizes the dropped waistline and straight silhouette typical of the 1920s.

For their Fall 2008 collection, design duo Rodarte took inspiration from the sculptures of Eva Hesse, an artist known for her innovative use of materials. Below, their elaborate hand-dyeing technique emphasizes the deconstruction and manipulation of fabric for which they are known. The black dye follows the draping of the fabric, and seems to run through the sheer, delicate white chiffon as the wearer walks and moves. The smeared fabric, the meticulous construction, the cobweb stockings and the spiked platform shoes all come together in a design that is a careful study of contrasts. 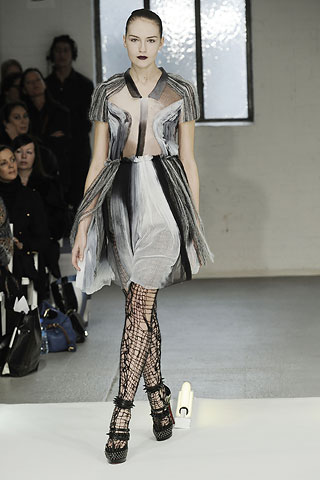 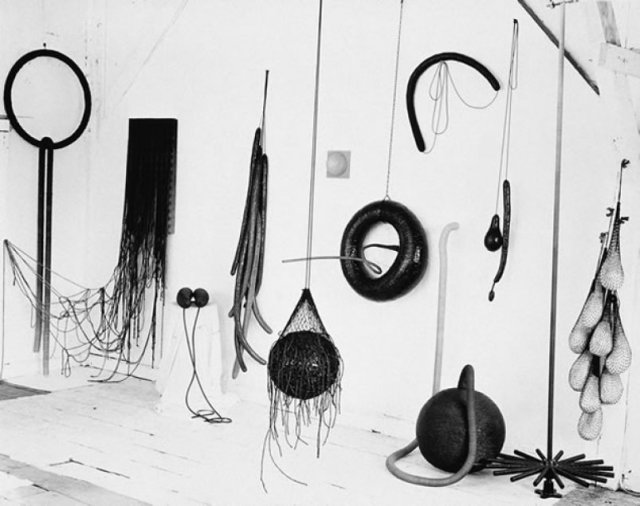 In the early 1960s fashion magazines, and most notably Vogue led by editor Diana Vreeland, embraced a new visual language. Fashion designers, photographers, painters and other visual artists of the period experimented with graphic lines and contrasting shapes in black and white.  It was not only fashion photography that changed forever, but also the posture and attitude of models and the way fashion was presented. The youthful and linear style of designer André Courrèges was a perfect fit for those times. The A-line silhouette of the dress below blurs the curves of the body, an effect enhanced by a plane of white fabric and a frame of black trim. The graphic quality of the dress lends itself to the new fashion photography. 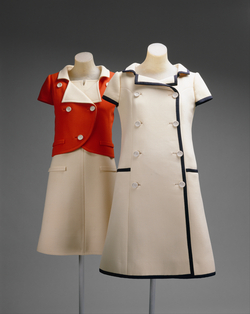 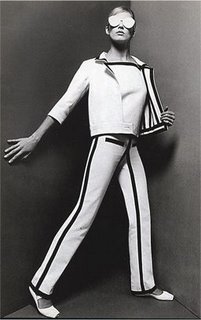 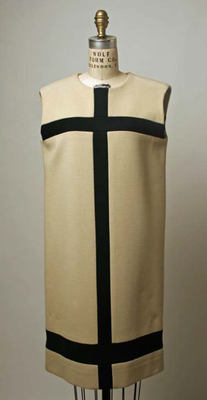 This dress, from the renowned Mondrian collection is another example of Saint Laurent’s contribution to the fashion and art dialogue. The patchwork of black bands and white planes recreates the tension between line, form and color in Mondrian’s work. The dress is flat like the canvas of the painter; it comes to life only with the movement of the body. While the rest of the collection also employs planes of primary colors, this black and white dress alludes to Mondrian’s later minimalist work. 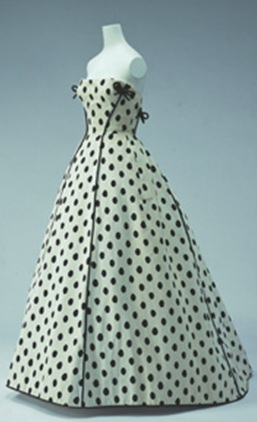 The design of this dress is typical of the larger-than-life style of designer Jacques Fath. He was an unconventional couturier for his time, neither shy nor reserved as some of his contemporaries; he liked to work with loud music playing in the background and to host lavish dance parties with his wife and muse, Geneviéve Boucher de la Bruyère.  Although often firmly constructed in keeping with the 1950s silhouette, his designs retained a certain playfulness, here exemplified in the use of oversized black polka dots.

Here are two more examples of elegant yet playful designs with polka dots. 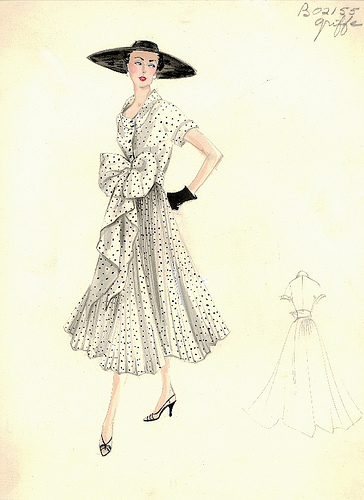 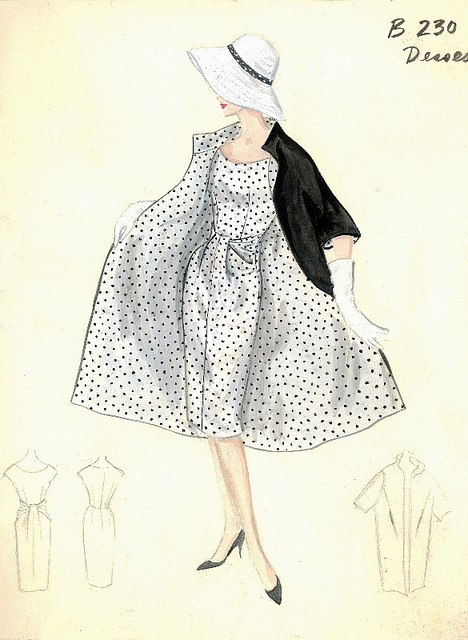 I’d like to finish the last post in the series with the image below, from Israeli swimwear brand Gottex. I have recently completed my thesis on the history of the company, as well as of the design and marketing methods it employed for may years. 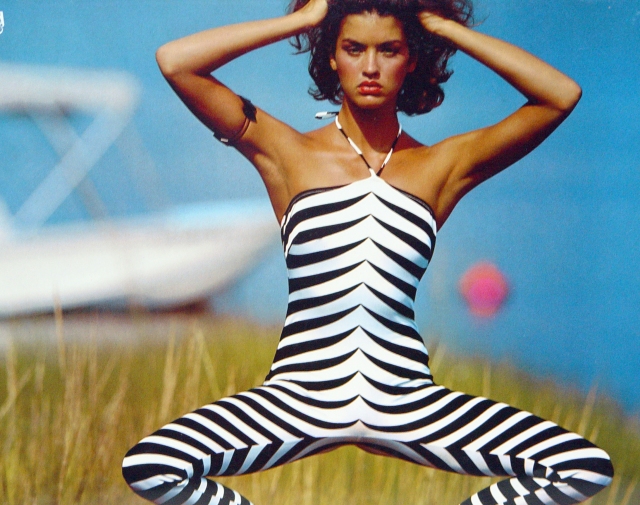 Since its early days in the 1960s Gottex showed many graphic designs in black and white. Designer Lea Gottlieb continued to design black and white groups every year until she left the company in 2001. This is a great example to how she often interpreted animal skins in a graphic way, a trend that begun in the 1960s and which she continued to expand over the years. And this is another example from designers Rudi Gernreich and Dolce & Gabbana.