In the last two posts, I have introduced how fashion designers structure garments in black and white, and how they explore contrasting ideas of sexuality and feminine models through the use of black and white lace.

This week I’d like to show some examples that illustrate the use of flowers in black and white. Flowers, by nature, are seducers. They endure in the wild by using their beauty and scent to lure pollinating insects and birds. In our culture flowers are associated with opposing notions of both life and death, of both innocence and sinister seduction and of both everlasting and short-lived beauty. Most commonly they are associated with femininity and feminine sensibility. Fashion designers are fascinated by flowers, not just as decorative motifs. The shape of flowers and the meanings attached to them are for many designers a great source of inspiration. In fact several designers have a signature flower; Dior, for example, had the lily of the valley, while Chanel’s camellia is still used by Lagerfeld as the signature of the house.

The charged symbolism of flowers is furthered when designers represent them in opposing black and white. Whether represented in the silhouette of a garment, or rendered in printed or embroidered fabric, black flowers make a dramatic statement, especially when contrasted with white. Whereas white flowers are associated with purity and innocence, black flowers are inherently ambiguous and mysterious. Since they do not exist in nature, black flowers enchant the imagination of artists, poets and fashion designers. 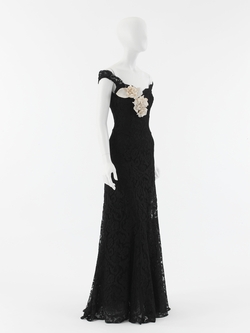 Chanel in her studio, 1937, making a corsage of fabric flowers. Photograph by Roger Schall.

Flowers are an inseparable part of Chanel’s legacy, and especially white ones. In this dress black is the perfect background for a corsage of white flowers. The graphic combination of black and white was favored by Chanel throughout her long career. Her romantic side, here exemplified in the hand-made flowers and delicate silk lace, never contradicts but rather complements her innate modern style.  Her style is often recognized by recurring themes, such as the modern, practical suits, the “little black dress,” and  key accessories such as the boater hat and the spectator shoe. The dress below underlines how much richer Chanel’s vocabulary really is. The fitted waistline and full skirt might seem at first to contradict Chanel’s preference for unstructured, loose-fitting silhouettes, yet the dress perfectly embodies her design philosophy. The sash is constructed with interior boning and gives way to a fluid, delicately embroidered fabric that follows the natural lines of the body. For Chanel, the body must always be comfortable and free to move, and the clothes must reflect a modern feminine ideal.

Floral evening dress designed by Coco Chanel as it appeared in Vogue June 1, 1937.

The dress below is part of Charles James’s collection of black and white ballgowns. Like so many of his designs it is composed of a sculptured, rigid bodice, almost capable of standing on its own, and an enormous billowing skirt. It is a whimsical and romantic manifestation of woman as flower. Originally created for the Standard Oil heiress Millicent Rogers in 1949, this dress became famous when it was photographed by Horst P. Horst for Vogue in 1951. 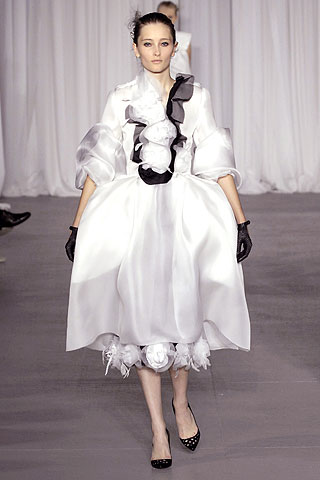 Recalling the same silhouette and taking inspiration from the eighteenth-century dresses depicted in the paintings of Thomas Gainsborough, sisters Laura and Kate Mulleavy designed this dreamy and delicate dress. The white flowers, meticulously made by hand, burst from under the skirt to evoke the restrained drama and fantasy of these paintings. What could have been a rather simple and direct interpretation is disturbed by a touch of black chiffon. Combined with black leather accessories, the attitude is distinctively Rodarte- strong, assured and somewhat subversive. 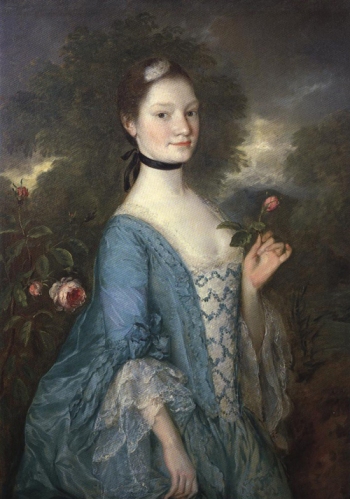 “People forget how important plants, flowers and gardens were in the life of Monsieur Dior,” said Galliano of the inspiration behind the Fall 2010 haute couture collection. The floral and organic structures directly reference Christian Dior’s first collection for Spring 1947, which he named ‘Corolle’ (or ‘Petal’). Under Galliano’s passionate gardening these petals have grown to fantastical sizes and shapes. Galliano also studied photographs of flowers by Nick Knight and Irving Penn, influences evident in his study of surface and of light and dark shadows. Christian Dior was often inspired by the flowers he loved. Here, his study of floral forms is extended to surface pattern and texture with flock printing, a technique that creates the illusion of woven velvet in the tradition of the Renaissance. Various historical references further the fantastical allure of this dress.  The graphic, yet whimsical black carnation  pattern on white, like the corset and padding built into the interior, evoke the late nineteenth-century designs of Charles Frederick Worth, the founder of the couture traditions Dior helped to renew  in the mid-twentieth-century.

Please come back again next week for the last part, Graphics, of this special four-parts post.