‘Coco’ Chanel’s ” little black dress” is maybe the most famous fashion item of dress. Although some fashion scholars challenge the perception that Chanel was the first to create and promote the chic, simple, and elegant “little black dress”, she is certainly most famous for it. But the combination of black and white is another Chanel signature look that is sometimes forgotten. Chanel herself favored the black and white look, which originated from men’s wear. Karl Lagerfeld too, not only continues to explore the black and white Chanel suit in each and every collection, but also uniforms himself with a slim black and white suit. Jeanne Lanvin is another designer that often wore black and white, and combined it with large pearls necklace. The combination of black and white inspired many other fashion designers in the twentieth century, even those known for their bold use of color. This four-part post explores how fashion designers in the past hundred years manipulated the contrast of black and white to create a modern, timeless look for women. Each post will be dedicated to one theme, the first- Structure, followed by Lace, Flowers and finally Graphics.

“Black comprises everything. So does white. They possess absolute beauty: they are in perfect harmony” (Gabrielle “Coco” Chanel)

The body, like clothing itself, is subjected to changing fashions. With draped or tailored fabric, fashion designers reshape the body to make it more beautiful according to the ideals of the time. With panels of black and white, the form of a garment is effortlessly enhanced, drawing attention to certain parts of the body while obscuring others and shifting its proportions. Be it the dropped waistline of the 1920s, the nipped-in waist of the 1950s or the waistless  A- line of the 1960s- it is the drape, cut and fit of the clothes with which women achieve the ideal body of their era. 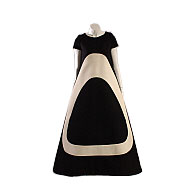 This evening dress is designer Michel Goma’s subtle interpretation of Op Art which reached its peak of influence on fashion in the mid-1960s.  Op Art black and white patterns which create an illusion of movement and disproportion, easily translate to fashion design. In this dress the inset of white and black silk creates an illusion of an elongated figure with a youthful high waistline while maintaining a simple A-line silhouette, which was very fashionable during the 1960s. 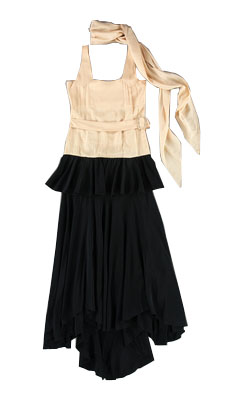 Throughout Lanvin’s career black and white emerges as one of her favorite color schemes, a combination she herself often wore. Although better known for using intricate embroidery and beadwork, Lanvin was also an expert of tailoring and draping. Here, black and white emphasizes the contrast between the structured bodice and the draped asymmetrical skirt.

Jeanne Lanvin in her office, 1936, wearing a black and white suit and a necklace of large pearls, two things she constantly wore.
Photograph by Roger Schall.

With the dramatic contrast of black and white, designers also blur the boundaries between femininity and masculinity. Men clad all in black, edged with white collar or cuffs, appeared as early as the fifteenth century.  By 1900, black suiting combined with white dress shirt, had become the uniform of professional men. This sophisticated and restrained look was adopted by twentieth-century designers seeking to convey new ideas of femininity. Although feminine ideals have evolved, tailored black and white clothes have endured as symbols of a confident and modern woman. 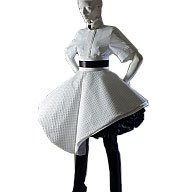 This tailored ensemble explores contrasting ideas of femininity and masculinity. The designers borrow elements from tuxedo suits, such as the crisp white blouse and black satin belt, and juxtapose them on a feminine silhouette, referencing both the flared shape of the 1950s and tutu skirts of Ballet dancers. The use of black and white not only points to the source of these elements but also underlines the blurred boundaries between feminine and masculine attributes. 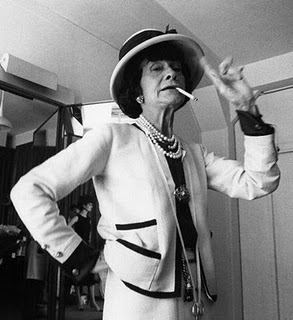 Since the early days of her career Chanel was drawn to the practical elegance of men’s wear. Similar to men’s fashion, her basic designs slowly evolved through subtle changes of details, rather than drastic changes of style. In the cocktail suit above the textured fabric of the shirt and jacket’s lining, the satin waistband of the skirt, and the black tie are all Chanel’s reinterpretations of men’s tuxedo. Together, they make a strikingly modern appearance, which is both timely and timeless.

This is the end of part I, please come back next week for part II, Lace.

3 Responses to Fashion in Black & White- Part I, Structure