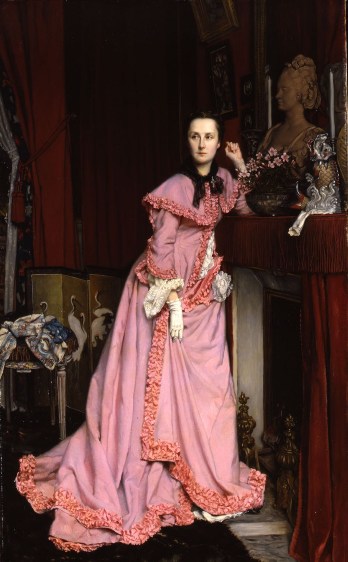 At the Getty Center in Los Angeles hangs this painting by Jacques Tissot.  The subject, Thérèse-Stephanie-Sophie Feuillant, the Marquise de Miramon (1836-1912) is painted in a pink velvet ruffled dressing gown.  The Getty’s records for this painting are remarkably complete, including two letters from Tissot himself to the Miramon family, asking for permission to display the painting at the Paris Salon of 1867, as well as swatches of the dressing gown’s pink velvet.

Dressing gown, peignoir, robe de chambre, wrapper and hostess gown can all be categorized under the umbrella term “at-home gown.”  It was not inappropriate to be seen in a dressing gown during the morning’s leisure hours, as reflected by the Marquise’s unapologetic attitude in being recorded in this state of dress.  Despite this, dressing gowns played a small role in scandals that rocked the art world at the Paris Salon of 1868.

In the Salon of 1868, Edouard Manet displayed Young Lady in 1866, in which the subject is also wearing a pink peignoir, like the Marquise de Miramon, and is pictured with her pet parrot.  Manet’s Young Lady is also seen wearing a cameo on a black ribbon, a popular accessory of the 1860s but usually depicted on women in street clothes—suggesting that the subject is caught at a point of transition in her state of dress.  Whether she is moving toward or away from nudity is the viewer’s choice (although the man’s monocle in her left hand might suggest the former). 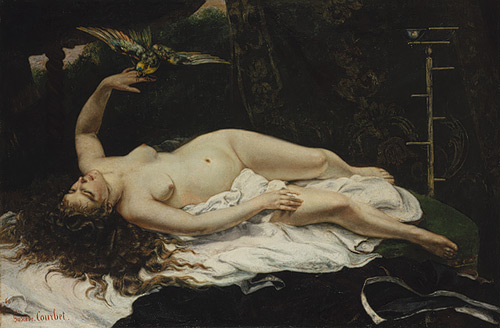 Gustave Courbet. Woman with a Parrot. 1864. Oil on canvas. Metropolitan Museum of Art.

However, critics blasted Manet’s work for its similarities to his friend Gustave Courbet’s Woman with a Parrot, a nude that had been rejected in 1864 by the Salon for indecency, but was granted a place in the show in 1866.  One critic wrote of Manet, “he has borrowed the parrot from his friend Courbet and placed it on a perch next to a young woman in a pink peignoir. These realists are capable of anything!”  The innocuous pink peignoir, a simple at-home garment, became representative of a divide between a scandalous nude and a slightly more tolerable portrait, the disconnect between Realists and Impressionists, and the growing moral distance between traditional and mid-century Victorians.

Regardless of the dressing gown’s relation to a scandalous nude portrait, it was very much a part of fashion in the 1860s, even appearing in Harper’s August 1860 and August 1861 issues.

Several extant dressing gowns of the 1860s still exist, showcasing luxury and ornamentation perfectly suitable for women of the aristocracy such as the Marquise de Miramon.

Fashionable, even at home. The fabric and trim of this dressing gown are so fine it appears to be more than just leisure wear. Dressing gown, ca. 1860. Metropolitan Museum of Art.

The print on this dressing gown reflects the craze at the time for cashmere shawls. Dressing gown, ca. 1866. Kyoto Costume Institute.

The Getty describes the Marquise de Miramon as “costumed in the latest style and surrounded by fashionable decorative objects” (Getty 2009)—clearly, leisure fashion in the 1860s certainly followed as much rule and regulation as other modes of Victorian dress, and provided just as much opportunity for expression.