While the roasted turkey may be the star of the American Thanksgiving table next Thursday, turkey feathers have had a steady supporting role in the fashion world for centuries.  Last spring, Karl Lagerfeld introduced his Autumn/Winter 2013 Ready-to-Wear collection for Chanel, which featured an abundance of ornamental turkey pointers and flats, bringing a fresh, modern use to a material that has long been used in fashion.

Feathers of all kinds have enjoyed a ubiquitous presence in fashion across many cultures and centuries; turkey feathers in particular are often used because of their abundance and ease of dyeing.  They come in different sizes and shapes and are well-suited for a variety of purposes: flats come from the turkey’s back, pointers from the wings, and marabou, which is often used for making boas, is found at the turkey’s hip. 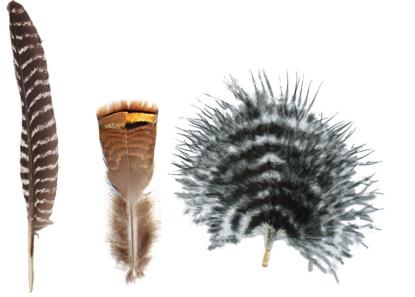 The colors naturally found on turkey feathers can be quite beautiful.

In the nineteenth century, turkey feather fans rose in popularity.  They were often made at home, especially when the blockades during the Civil War prevented fine European fans from being imported. 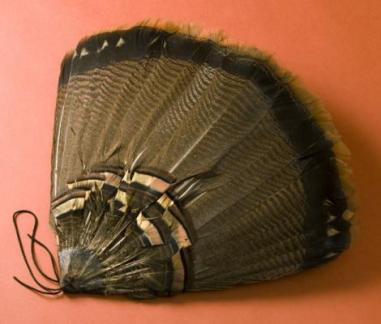 Turkey feathers have also been used as decorations on hats.

Advances in textile production have introduced new ways of using turkey feathers.  Scientists have experimented with excess feathers from slaughterhouses to remove the stiff quill from the feather and separate the fibers that make up the feather; yarns are spun from the turkey feather fibers and nylon. The fabric woven from these yarns is being tested for insular properties for use in jackets.

Of course, in a nod to the extreme, sometimes turkey feathers are used to construct entire garments.  In November of 1947, Barbara Ehrhart crafted her wedding gown, as well as the dresses for her bridesmaids, entirely out of turkey feathers, in line with the Thanksgiving theme of her nuptials.

Barbara Ehrhart and her bridesmaids. 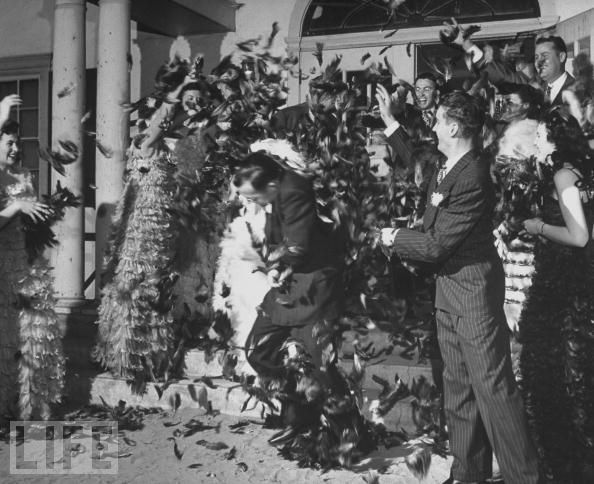 The happy couple was not pelted with rice when leaving the church, but showered with turkey feathers.       Of course.

In Ramona, California, once known as the “Turkey Capital of the World,” turkey feather fashion was at a premium!  The  city’s famous “Turkey Days” enjoyed their heyday from 1933 to 1941. 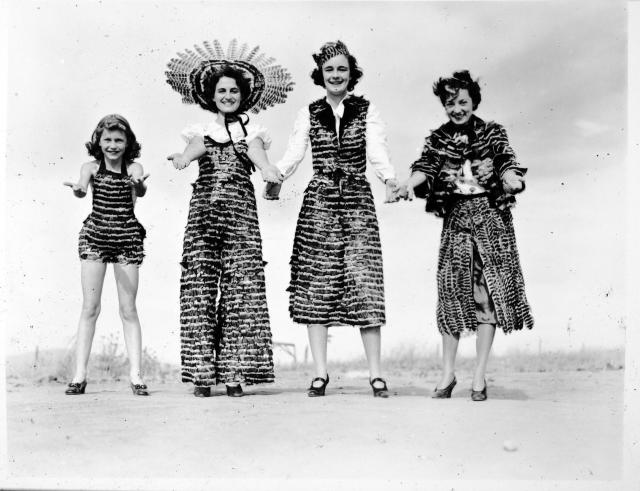 Publicity photo for the Ramona Turkey Day; majorettes and people dressed in clothes made of turkey feathers.      No date. Museum of Man, San Diego.

Turkey feathers are also responsible for attiring this handsome fellow:

For our American readers, have a happy Thanksgiving.  We’ll be back in two weeks to feature another fabulous Fashionista!