I was so saddened by the news that fashion designer Lea Gottlieb passed away last Saturday afternoon, she was 94. She lived long and exciting life and inspired many with energy, love of life, and her relentless study of all things beautiful.

For the past few years I have studied her work for the Israeli luxury swimwear house Gottex, which she founded with her husband Armin in 1956. Together they build a fashion empire that reached its height of success during the 1990s, celebrities such as Princess Diana and Claudia Schiffer wore Gottex and the brand was soled in luxury department stores such as Harrods in England and Saks and Bloomingdale’s in the United States.

Geometric lines and shapes; Gottex designs in the 1960s are inspired by the Op-Art movement and current with international trends. It was only later in Lea Gottlieb’s career, towards the end of the 1970s, that she began to experiment with bold prints and unusual sources of inspiration for swimwear, such as art, crafts, and the cultures of the Middle East. Two cut-out swimsuits from the 1960s (excact year and photographer unknown)

My thesis paper is dedicated to Lea Gottlieb’s designs from the 1980s and 1990s and to the history of the company she established. The more I studied her work the more intriguing it became. This post would be a book length if it had to covered all the layers and depth of her work. She was inspired many different things that came from seemingly foreign world,  but she took all these visual materials, sampled elements that fit into her vision, and put them back together in the most personal and unique manner. 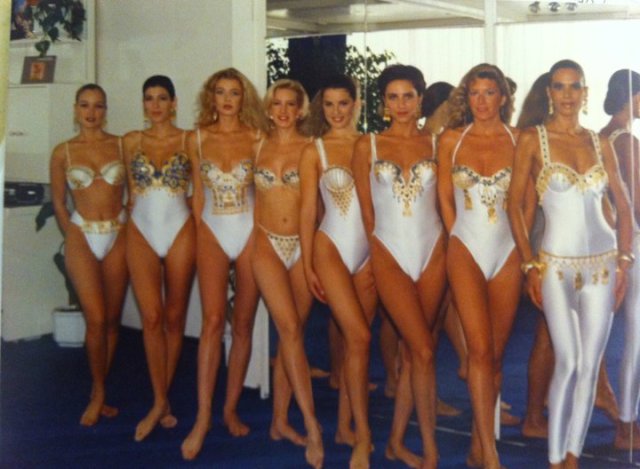 One of the most memorable of Gottex’s collections was Jerusalem of Gold from 1992, Photograph courtesy of Yaron Minkowski, Private archive

Next year, Design Museum Holon in Israel, will host a retrospective exhibition of her work. I am very privileged to be part of this exhibition which has been long time coming.

Tyra Banks in the 1994 catalog which was shot in the Israeli Negev Desert. The landscapes of Israel informed Lea Gottlieb’s sense of color. 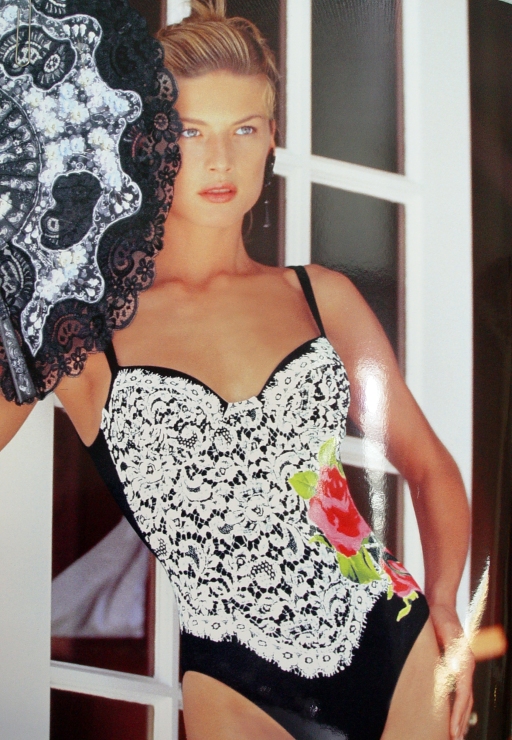 The original swimwear designs were not always meant to be dipped in water. Lea Gottlieb used materials that were unusual for swimwear and developed new materials, such as Lycra in wet look and leather look that were never before seen. Here , a suit printed with lace pattern was inspired by Spanish Flamenco. Gottex Catalog, 1997.

Here is a post I have written on Lea Gottlie in the past. I hope to continue and share what I uncovered in my research, as I consider Lea Gottlieb to be not only the most important Israeli fashion designer, but also the most interesting swimwear designer in the world. May she rest in peace.

This entry was posted in Uncategorized and tagged Gottex, Lea Gotllieb, swimwear. Bookmark the permalink.