Cary O’Dell’s work has appeared on PopMatters.com, Thoughtcatalog.com and Wornthrough.com.  His book, “June Cleaver Was a Feminist!  Reconsidering the Female Character of Early Television,” will be published in the fall by McFarland.  He works for the Library of Congress and lives in Culpeper, VA.

At the risk of preaching to the converted, it’s time to take fashion seriously. It’s amazing how fashion (its product, people, and influence; its designers, magazines and models) is still largely scoffed at by the public and the press.  The criticism is ancient, recent, soft, loud and constant.

In 1991, in her well-known tome “Backlash:  The Undeclared War Against Women,” author Susan Faludi takes a dim view of fashion, painting it as an organized oppressor of women.  Referencing a previous ad agency survey, she writes, “The more confident and independent women become, the less they like to shop; and the more they enjoyed their work, the less they cared about their clothes.”

In the 2009 documentary “The September Issue,” “Vogue” editor Anna Wintour had to concede that her siblings–one who is the political editor for the UK’s “The Guardian,” two who work for world relief agencies–are simply “amused” by what she does for a living.

In October of last year, artist Leannie Van De Vyver constructed a pair of backward high heels as part of her “Scary Beautiful” art project.  The shoes, when worn, pitch the wearer forward at the knee but then demands them to lean backward to maintain their upright balance.  The footwear has been described as the “scariest shoes of all time.”  They temporarily cripple whoever wears them.  In Van der Vyver’s words, they are meant to challenge beauty ideals and upend fashion.  “The striving for perfection in beauty and fashion…is creating monsters,” the artist says. 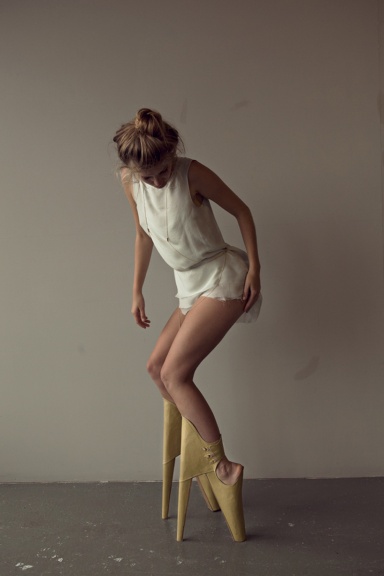 Curiously, while the worlds of fashion regularly takes its hits, the wide world of  professional sports–with whom it shares some startlingly commonalities—is habitually celebrated and so incorporated into American and world culture that doing without it, or criticizing it, seems almost unthinkable.

It’s interesting though to compare the two.  Both sports and fashion are talked about in terms of “seasons.”  And their most famous foot soldiers (professional athletes in sports; models in fashion) have more in common than just their joint dating pool.  That we seldom see 5’2” fashion models is the same reason we seldom see 5’2” basketball stars (or six-foot jockeys).  Their bodies are just not built for the task.  For success in either industry, it helps to have a genetic leg up.  But no one holds Shaq’s, Kobe Bryant’s or Chris Paul’s height against them the way that the fashion industry’s top models are often regularly ridiculed for creating “unrealistic” images with their statuesque-ness.  (We’ve long used supermodels as a cultural catch-all for all that is wrong with young girls and women and the world.  From eating disorders to “heroin chic,” when in doubt, blame Kate Moss?)

Interesting too that in both careers, athlete and model, participants tend to peak early.  Somewhat alarmingly, the ages in both professions are becoming increasingly younger.  Olympic gymnast, Gabby Douglas, is 17; diving protégé Tom Daley is 18.  And though in the winter of 2011, the Council of Fashion Designers of America issued “guidelines” to ban the use of models under the age of 16 from participating in shows geared toward adult women, youth is still the word on the runways and in the modeling industry. 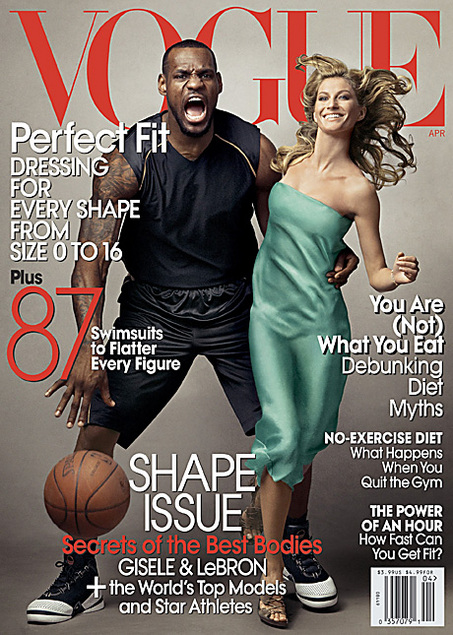 But, that said, thanks to the likes of Naomi Campbell, Iman, Lauren Hutton and the incomparable Carmen, the “retirement age” for models is being increasingly stretched.  The same however cannot be said for professional footballers, baseball or hockey players or others.  Michael Phelps retired from the pool at the grand old age of 27; Pete Sampras hung up his tennis racket at age 31.  In contrast, Naomi is still stalking the runways at age 42, Carmen is 81!

Economically as well, fashion and sports each generate billions of dollars in revenue.  Dozens of cities around the country have attempted to resurrect their local economies via the construction of new downtown stadiums meant to lure in tourists and merchants.  Often, though, these communities have been disappointed when the final figures don’t meet expectations.  So while sports is big business, is fashion actually bigger?

What appears on the runways is both the end and the beginning of a multi-billion dollar infrastructure dependent on these cut-and-died strips of cloth, these visions of revitalized hemlines and exotic colors.  Designers, cutters, beaders, seamstresses, models, modeling agencies, make-up artists, make-up companies, perfumeries, photographers, photography studios, magazines, websites and blogs, stylists, editors, hair stylists, manufacturers, writers, retailers, distributors, wholesales supplies (for thread, buttons, ribbons, zippers and the like), truck drivers, support designers, fabric mills, advertising executives and advertising agencies all spiral out from those few minutes of new clothes showcased on the catwalk.  The economic survival of them all hang, literally, by a thread.

Money comes into play again when another aspect of the sports vs. fashion analysis is considered.  Those who scoff at the price of a couture dress ($10,000+) or a Chanel bag ($5,000+) are usually the same who would never question the quarterback who is paid multiple millions to throw or catch a ball on a Sunday afternoon.  Peyton Manning, of the Denver Broncos, makes $18 million a year.  Dwight Freeney, a defensive end for the Colts, made $19 million last year.  To some fans, this is money well spent.  But for that kind of money, wouldn’t it be nice to have something to call your own, to wear rather than just watch?

Diverting from sports comparisons for a moment, the high cost of high fashion that is belittled by some is put into even better perspective when spoken about in relation to cars.  Those who believe a Dior or a Givenchy dress is an overpriced waste, should be given a test, a choice between owning two types of automobiles:  a basic but running roadster (like a perfectly working Pinto or Yugo) versus an Aston Martin or a brand-new Ferrari.  For most, the choice would be easy.  But therein lies the rub, and the parallel.  What’s the real difference between all these jalopies?  Like the clothes you wear, both vehicles will get you to where you need to go–just not in as much style.

With fashion so often in step with professional sports, why then is one viewed as the national pastime and the other often viewed as something shallow and sulfurous?  Early, radical feminist Virginia Woolf saw and stated clearly the traditional division of societal attitudes.  I paraphrase her:  this is the domain of men (sports, war) therefore it is important; this is the domain of women (fashion, home life) therefore it is unimportant.

Consider how true this is:  while just about every evening newscast contains roughly 7-10 minutes devoted to sports.  And just about every newspaper (those that are still around anyway) contains an entire section of their pages devoted to sport recaps and final scores.  Fashion, meanwhile, despite its prominence on the web and via such fashion-friendly outlets as the E! and Style networks, remains under-reported.   No major news outlet covers fashion consistently; Elsa Klensch has been off CNN since 2001.

Fashion would no doubt be held in better stead if not for the fact that over the years, usually in the name of feminism, many women (like Faludi above) have turned against it.  From the “Freedom Trash Can” erected at the Miss America protest in 1968 that became the receptacle of bras and high-heels, fashion in all its forms has often been on a feminist hit list.  But the idea that women are a mindless herd following fashion edicts is more anti-woman than any well-cut Chanel suit.  That a woman can’t be both fashionable and powerful is disrespectful to both fashion and the women who wear it.

Furthermore, the concept that all forms of womenswear is some sort of male-engineered attempt at torture or female impairment does not pass the test of common sense.  If skirts are America’s way of keeping women constrained or immobile, then why, historically and in other cultures, do men often don skirts or skirt-like garments?  Scottish men wear kilts.  Ancient Romans wore togas.  And the higher up male religious leaders become (consider monsignors and the Pope), the more likely they are to wear leg-less cloaks.

Placing the industry and philosophy of fashion into such comparative matrixes inevitably, ironically, elevates fashion, if only due to its far greater daily necessity:  after high school or college, few of us play any organized games ever again but we each have to get dressed every morning.  Knowledge of fashion, its power and meaning, seems far more essential sociologically too.  Clothing is part of the face and persona we present to the world.  Badly matched, unkempt, undersized, and even egregiously outdated clothes communicate the wrong message about our abilities and even our sanity.  We can get through adulthood without ever playing a baseball game or attending one, we cannot go through it naked nor ill-attired for the variety of roles we must play throughout our lives.  Hence, we can no longer allow fashion to be viewed as something frivolous and insignificant.