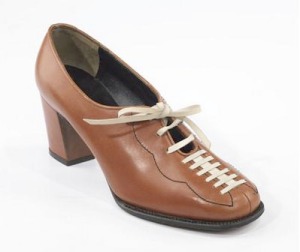 Levine, Beth. “Kick Off“, ca. 1965. Leather upper with a Cuban and a welt sole, Size 5B. Part of the Brooklyn Museum Costume Collection at the Metropolitan Museum of Art.

Known for her elegant, witty and whimsical shoe designs, Beth Levine found inspiration in her travels, in new materials, and from runway fashions, as she sought to pair the best shoe silhouette with the rapidly changing clothing styles of the 1960s and 1970s. Her legacy is one of inspiration and determination as she sought to communicate her ideas with the public. She predicted future trends while deconstructing the shoe until it became almost nonexistent and while transforming the shoe to reach new heights and lengths.

Levine (1914 – 2006) began her career as a shoe model for Palter DeLiso in 1938. While working at DeLiso, Levine became familiar with the design process, and after four years, she left to work at a series of other footwear companies including I. Miller, the Carlisle Shoe Company, Pincus-Tobias, and Andrew Geller, where she met her husband Herbert.

After marrying Herbert in 1946, the pair decided to found a company with a mission to produce quality shoes for American women. With the desire to compete with established shoe companies, the couple chose to name their company Herbert Levine, thinking a masculine name would give more credence to their craft. However, Beth was always the head designer and the innovative force behind the firm’s clever creations.

Beth Levine had many firsts over the course of her career. Around 1951, Beth Levine was the first American designer to incorporate a stiletto heel in a shoe design, and she also introduced the pointed toe to America women in 1956. Beth discovered both the stiletto and the pointed toe when she and Herbert were on vacation in Europe, on one of the many trips they made when seeking inspiration for the next collection. Later in her career, in addition to the stiletto and the pointed toe, Beth Levine designed unique heels, toes, and even a series of topless shoes, a functional design featuring adhesive pads on the sole. 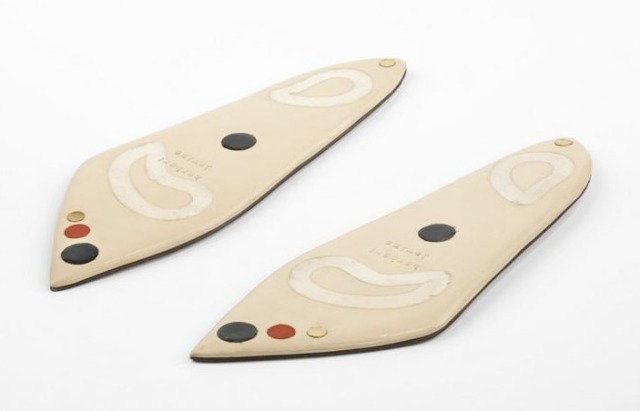 In addition to testing new materials and minimalistic designs, Levine sought to reinvent and reinterpret existing styles, including the boot. It was under Levine’s influence that the tall boot entered women’s fashion, becoming a style statement instead of a cold weather necessity. Inspired by the shorter hemlines of the 1960s, Levine created boots that rose higher and higher on the thigh in a plethora of colors and materials. This strong, sensual design became even more arresting when realized in soft, skin-hued leather and bold, black netting. Levine’s designs became a icon of 1960s fashion; in 1966, Nancy Sinatra chose to wear Levine boots while promoting her hit single, “These Boots are Made for Walking”. 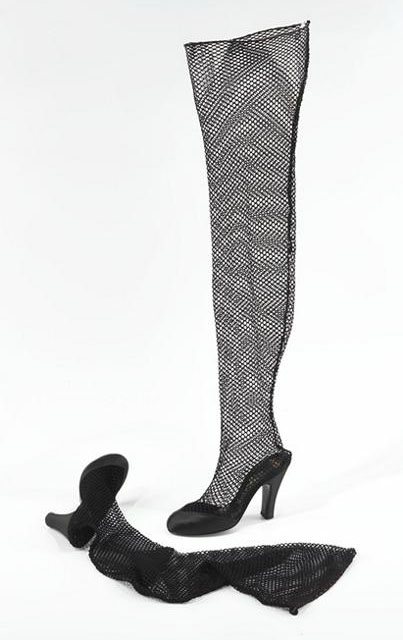 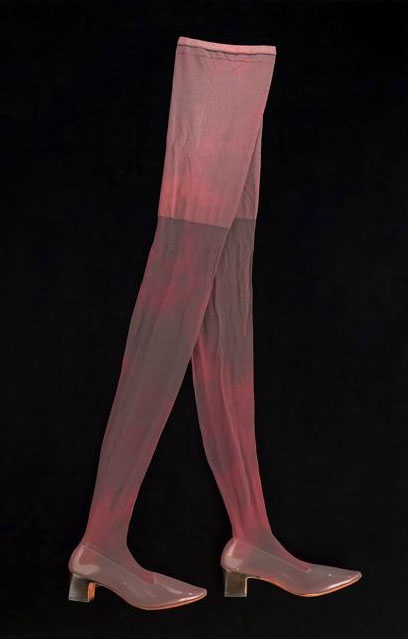 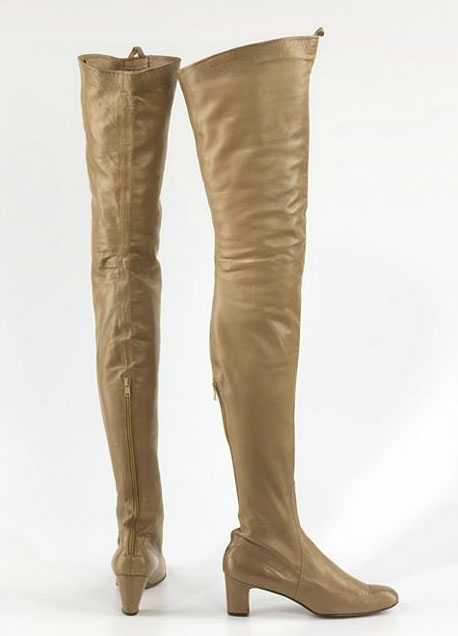 In the July 16, 1954 edition of Footwear News, Beth and Herbert Levine wrote a guest column titled “Fashion Footlights…”. The column includes the following quote: “Girls who wear frivolous shoes always have a sense of humor.” And what a sense of humor Beth Levine had! Over the course of her career, she used plastic, vinyl, egg shell, and fabric to create both elegant and whimsical designs that were far from practical but still wonderfully functional. 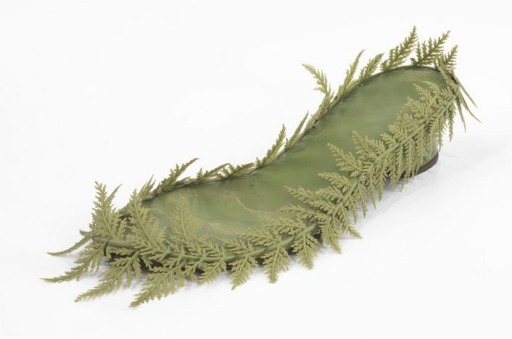 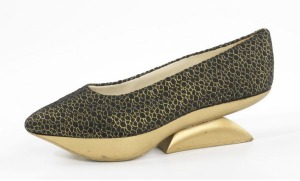 Levine, Beth. “Kabuki”, ca. 1965. Silk, metallic, and wood shoe with a cantilevered heel. Part of the Brooklyn Museum Costume Collection at the Metropolitan Museum of Art.

For detailed information and wonderful images of Levine’s designs, please see the resources listed below. Most notably, these resources contain images of advertisements, photos of the construction process, and clips from newspapers, including Footwear News.