On this day in fashion history…

To the fashion world and her glamorous clientele, the Ukrainian-born New York-based couturier Valentina Nicholaevna Sanina Schlee was known simply as Valentina. Born on this day in 1899, Valentina came to America in 1923 with her husband and opened her first shop on Madison Avenue in 1928 with thirteen dresses from her own wardrobe. Like her contemporary Chanel, Valentina would make a name for herself designing simple yet elegant clothing that she herself would wear. Tall and slender with dark hair and a pale complexion, Valentina was a striking figure–and subsequently her own best model. “She made wonderful clothes, but nobody looked as well in them as she did,” said designer Bill Blass who collaborated with the designer in the 1970s.[i] Vogue and Life magazines often covered the designer’s collections where she starred as the sole model.

Valentina modeling her own design in Vogue, November 15, 1944 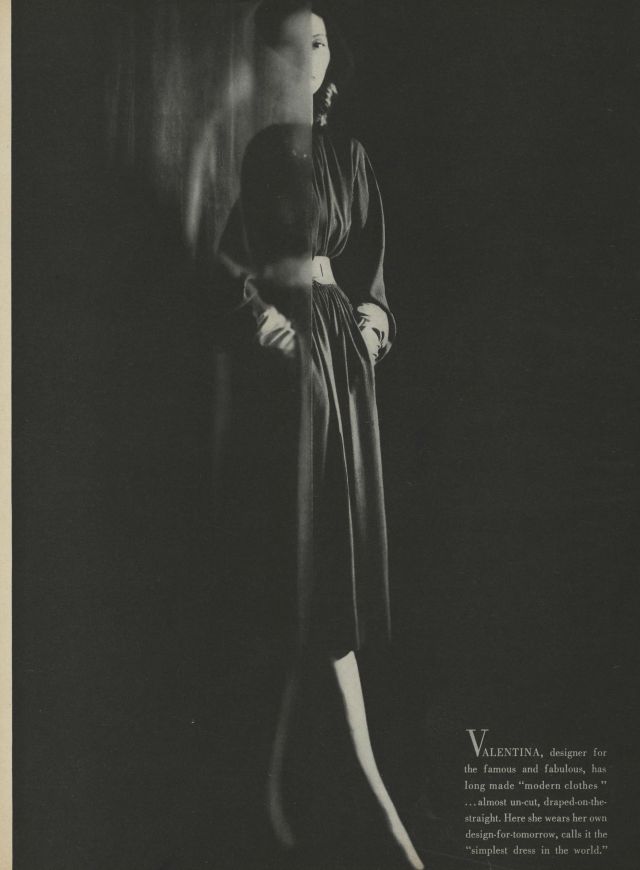 Valentina modeling one of her designs in Vogue, February 1, 1945

A delightful montage of photographs of Valentina modeling her designs accompanied a 1951 article in Vogue entitled Valentina’s One-Woman Show: “Indeed, her whole business is just that. She is her own model (as photographed here); buys all fabrics; does all designing; does the selling; supervises the fittings; and–with her spiced accent, her transposed phrases, her black-and-white convictions–is indispensable at all times.”[ii] 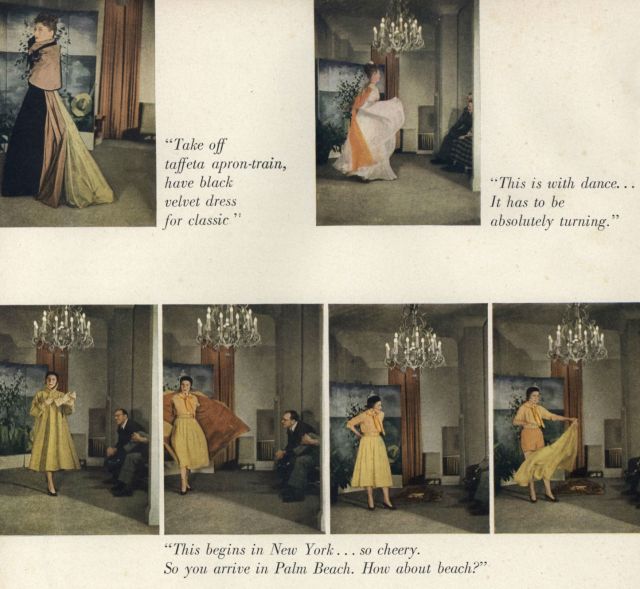 Valentina became a celebrity in her own right, as famous for her impressive roster of celebrity clientele, who included Greta Garbo and Katherine Hepburn, as for her charismatic personality and personal style. She remained a fashion fixture throughout the 1930s, 40s and 50s, one of a small handful of designers who gave a face to American couture (quiet literally!) during a period dominated by French tastes. Valentina’s timeless elegance is perhaps attributed to the simplicity of her designs, whose emphasis on the line and curve of the body’s anatomy still appeals to us today. “Simplicity survives the changes of fashion,” Valentina said in the 1940s, “Fit the century, forget the year.”[iii] Valentina’s couture business closed in the late 1950s. She died in 1989 at the age of 90.

A rayon crepe Valentina gown, c. 1940, in the collection of the Museum at FIT

Cassidy Zachary is a fashion historian, research consultant and writer living in Albuquerque, New Mexico. She also works as a costumer in film and television. Her first book entitled Fashion and the Art of Pochoir, written with co-author April Calahan, is to be published by Thames & Hudson later this year.
View all posts by Cassidy Zachary →
This entry was posted in Uncategorized and tagged 20th Century Fashion History, Haute Couture, Valentina. Bookmark the permalink.