Next Saturday the Fashion and Textiles Studies program at FIT will hold their annual symposium. To get you excited, we will share some of the papers that will be presented in the week to come.  We hope to see you there. The event is free and open to the public. 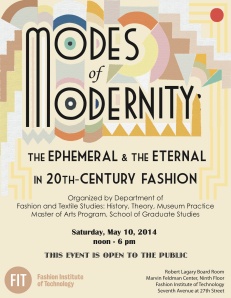 Astronomy, an important area of study since classical times, is a science that informs the way people experience and interpret their place in the universe. This understanding of the scale of our world and the laws of nature shapes the philosophies and aesthetics of all creative people, including textile and fashion designers. Learning that our galaxy is not alone but one of billions, or witnessing the massive human-wrought destructive power of a nuclear weapon, can affect the concerns and decisions of anyone on Earth who is inclined, or forced by the circumstances of their time, to notice. In the study of modernism in fashion and textile design, much has been written about the revival of classical ideals in connection to drapery, but it is less understood that many of the designers known for their interest in classical ideals were also interested in astronomy.  “Clothed in the Cosmos: Astronomy in Textile and Fashion Design, 1920-1945” investigates how an interest in astronomy influenced the aesthetics and motifs in the design of fashion and textiles, framed within the time period beginning with the opening of the Wilson Observatory in California in 1917 and ending after World War II.

Vanessa Garver was raised in Atlanta, Beijing, and Shanghai, and received a BA
in art history from Carleton College. She has interned at the Metropolitan Museum of Art, organic textile company Rubie Green, Lonny Magazine, and F. Schumacher. Worked for three years at the Appraisers Association, an arts nonprofit, as the design and communications coordinator. Most recently, she interned in the archives of Calvin Klein and Ralph Lauren.